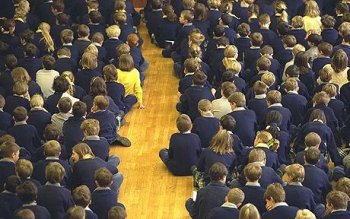 The Humanist Society Scotland (HSS) has launched a judicial review against the Scottish Government following its refusal to allow sixth form pupils to opt themselves out of Religious Observance.

Parental permission is currently required before pupils in Scotland can opt out of religious observance in schools.

The UN Committee on the Rights of the Child made a strong criticism of this arrangement, recently recommending that Scotland repeal legislation on "compulsory attendance at collective worship in publicly funded schools and ensure that children can independently exercise the right to withdraw from religious worship at school."

Chief Executive of the HSS Gordon MacRae said: "Today in Scotland young people are trusted to get married, join the army and vote in elections and for the constitutional future of Scotland . However, Scottish Ministers still do not trust them to make their own decisions about attending Religious Observance or to give young people the same rights as those living in England and Wales.

"For sometime now Humanist Society Scotland has been calling on the Scottish Government to update its policy on Religious Observance. I had hoped that if they would not listen to us then at least they would listen to the United Nations Children's Rights Committee.

"We have worked with a number of organisations and individuals over the years to seek to reform Religious Observance, most notably the Church of Scotland in 2014, with whom we issued a joint call for reform.

"Sadly our efforts to seek progressive reform of this outdated requirement of Scottish education has failed. The Scottish Government's policy on religious observance is a mess, a classic political fudge. Our young people deserve better."

The HSS have now launched legal action following the refusal of the Scottish Government to allow young people to withdraw themselves from religious observance in line with the recommendations of the UN.

Meanwhile, in Northern Ireland a campaign to allow teens the right to opt-out of collective worship recently won the backing of the Alliance Party.

"We believe that pupils of all ages should be able to determine their own religious views at a suitable age. The state has no business recommending, implicitly or explicitly, what someone's religious views should be. Nor do they have any business delivering biased education to make people more likely to believe a certain religious view.

"We're now in a great place to win the support of other parties for this policy - if we can do that, we can bring this policy to the Assembly," he said.

"Please do your bit and email your local MLA, asking if they will back a self opt-out from collective worship for post-16/sixth form students".

Currently students in Northern Ireland can only withdraw from prayers with parental permission.

The right for sixth form pupils to withdraw themselves from collective worship in England and Wales was won after campaigning by the National Secular Society.

Responding to representations made by the NSS just last month, Justine Greening, the Secretary of State for Education in England, said the Government had "no plans to change the current requirements for the daily act of collective worship".

The NSS is seeking a change in the law in England and Wales to replace the legal requirement on schools to provide worship with a new duty to ensure that all aspects of the school day, including assemblies, are inclusive of all pupils.