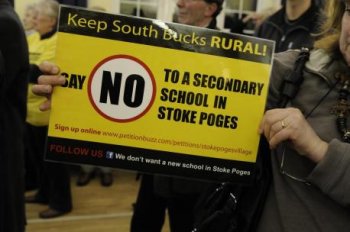 Two councils have lost a high court battle against the decision to have a Sikh faith school situated in the small village of Stoke Poges.

The Parish Council and South Bucks District Council both sought a high court ruling over the location of the Sikh-ethos free school in the village.

Stoke Poges Parish Council said the free school was "neither needed nor wanted".

Saera Carter, Vice-Chair of Stoke Poges Parish Council, said that the decision by the high court was "a huge disappointment for small communities everywhere."

She said that residents had been "bullied and ignored" by the Government and that free schools were "fundamentally flawed".

"We hope that, despite losing our challenge today, it will persuade the DfE to look much more carefully at where it sites Free Schools and that these are kept only to locations where they are both needed and wanted.

"The residents of Stoke Poges have demonstrated that central Government can be challenged, and, in a democracy, it is right that it should be, but it is a pity that this has had such a lasting and significant impact on our village and surrounding villages."

The school has been refused planning permission in 2013 by both councils, and an independent Planning Inspector said the school would make adjacent houses "uninhabitable". But the then-Secretary of State for Communities and Local Government, Eric Pickles, overruled that recommendation and approved the faith school despite local objections and his own promise to stop "the compulsory imposition of Whitehall know best decisions".

The Council said that the opening of the school has had a significant financial impact on families as parents will now be forced to pay for travel to schools they would have otherwise been subsidised for had the Khalsa Academy not opened.

50% of the Khalsa Academy's places are allocated on the basis of religion and when the school first opened local residents objected that it seemed to be focusing its recruitment on Sikhs living in neighbouring Slough, Southall and Harrow rather than serving the local community in Stoke Poges.

In 2015 the National Secular Society assisted a number of families who were allocated a place at the school. One mother complained said that she feared her daughter would be a "religious minority" and "isolated" at the school when "each day they take students off for morning prayers and my daughter would not be doing that".

Admissions documents state that the school has "regular religious functions", though it claims it is welcoming to all. The school's website says that it exists to "serve all members of the Sikh community" as well as those of other faiths and no faith, provided they "support and respect the religious ethos of the school."

Stephen Evans, the campaigns director of the National Secular Society, commented: "This ruling means that children from Sikh families will continue to be bussed in to attend a faith school in Stoke Poges, and that local people will have to send their children to a school that is at odds with their worldview or pay for school buses to reach non-Sikh schools they would otherwise have been subsidised for.

"Faith-based schooling results in religious segregation and the imposition of religion in schools against parents' wishes. That's why we campaign for a secular education system that doesn't divide children by religious background."