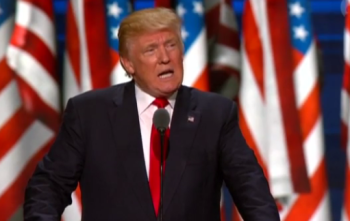 During his acceptance speech at the Republican convention, Trump said that evangelical Christians "have much to contribute" to his campaign, and he said that their support was a "big reason" why he had won the Republican Party's nomination.

The candidate told the Republican convention that he would work to repeal the Johnson Amendment, a law which prevents tax-exempt organisations, including churches, from endorsing candidates or becoming involved in partisan politics – though it was not designed to specifically target religious organisations.

Trump said the law prevented evangelicals from "speaking your mind from your own pulpits."

The law "threatens religious institutions with a loss of their tax-exempt status if they openly advocate their political views," he claimed.

Trump said that evangelicals' voice had been "taken away" and that he would "work hard to repeal that language and to protect free speech for all Americans."

The Republican Party platform also states that "God-given" rights must "always prevail" over the courts.

Reverend Barry Lynn, the executive director of Americans United for the Separation of Church and State, said the proposals were "short-sighted, reckless and corrosive to religious life."

"The Republican platform seeks to turn America's houses of worship into miniature political action committees," Lynn said, and he noted that "the amendment bars only endorsement or opposition of candidates. Speaking out on issues is permitted."

In 1996 Americans United set up 'Project Fair Play' to "educate religious leaders and other Americans about tax exemption and political activity."

"Religious leaders may freely address political and social issues from the pulpit. But they may not use their faith communities' resources to endorse or oppose candidates, donate funds to candidates' campaigns, issue endorsements or engage in other activities that have the effect of intervening in an election," the campaign says.

"Pastors and religious leaders are free to endorse candidates and engage in politics—and frequently do. But we draw the line when it comes to taxpayer subsidized tax-exempt organizations climbing into the political arena."

Trump also pledged to replace "our beloved Justice Scalia" with "a person of similar views, principles and judicial philosophies."

And he elaborated on his intention to bar Muslims from entering the United States, by saying in his acceptance speech that "we must immediately suspend immigration from any nation that has been compromised by terrorism until such time as proven vetting mechanisms have been put in place."