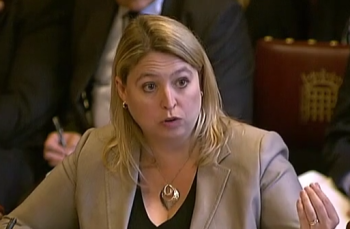 Security minister Karen Bradley MP has faced strong criticism in a letter from the Defend Free Speech coalition, following her appearance before the Joint Committee on Human Rights.

Discussing proposed 'extremism disruption orders' (EDOs), the minister told MPs: "For me the public promotion of an ideology which can lead to greater harms is what I see as being extremism."

She said the "harms" included terrorism, violence against women, hate crime and "wider social harms" which could lead to "division".

Simon Calvert wrote to the minister, on behalf of campaign groups including the National Secular Society and the Christian Institute, that her remarks had caused "considerable alarm".

"Your difficulty in articulating a clear, consistent definition of the kind of activity the Government aims to punish via civil orders was very concerning. The Home Office has been working on the issue for well over a year and yet the impression was given that the Government still has no clear idea how to legislate for what it wants to achieve."

The Government originally proposed 'extremism disruption orders' to "eliminate [non-violent] extremism in all its forms".

Mr Calvert continued: "The Defend Free Speech campaign, and many of the groups associated with it, are greatly concerned that the proposed 'civil orders regime' will damage both security and civil liberties. They risk distracting the authorities away from terrorism and violence and into monitoring and punishing legitimate expressions of opinion."

During the meeting, Harriet Harman MP said that MPs still "don't know what civil orders are being talked about", or "what the sanctions are likely to be" and that the Government had still failed to even define what 'extremism' meant.

The Defend Free Speech campaign has welcomed government commitments to a public consultation, but has insisted in its letter to the minister that the consultation must "include precise statutory definitions that can then be subjected to scrutiny."

"A consultation will be worthless," Mr Calvert said, "if it does not give the actual wording with which the Government intends to resolve the tension between security and liberty."

The campaign has requested an urgent meeting and said that the "Home Office cannot simply shrug its shoulders and say 'we're not sure what we're doing'."

The Committee is seeking evidence on the Counter Extremism and Safeguarding Bill and the NSS warned in its submission that the vague definition of extremism offered by government ministers and the low threshold for prosecution "combine to produce a proposal with potentially toxic effects for freedom of expression, freedom of religion and our core societal values and human rights."

In the submission the Society wrote that it, like the Committee, awaited substantive language from the government on the crucial question of how it would actually define in legislation what 'extremism' is.