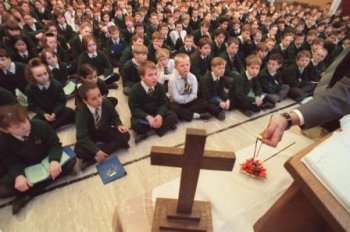 Thirty campaigners, including academics, MPs, peers, faith groups and educators, have called on the Government to abolish the law requiring Christian worship in English schools, following criticism of the practice from the UN.

The signatories to the letter, organised by the National Secular Society, include Ted Cantle, who warned over a decade ago that religious and ethnic communities in Britain were living "parallel lives", Paul Rowe, the CEO of Educate Together, Caroline Lucas MP, historian Dan Snow, Professor AC Grayling and a range of educators concerned about the imposition of Christian worship on pupils.

"There is a growing consensus," the signatories say, that collective worship in schools should be abolished.

The letter follows a recommendation from the United Nations Committee on the Rights of the Child that pupils be given an independent right to withdraw themselves from religious worship held in schools.

The UN said it was "concerned" that UK law required pupils to take part in worship and that they couldn't opt themselves out.

In a recommendation to the UK government, the Committee said that action should be taken to "repeal legal provisions for compulsory attendance at collective worship in publicly funded schools and ensure that children can independently exercise the right to withdraw from religious worship at school."

There is a growing consensus among educators, academics, parents and pupils that the law requiring the provision of 'broadly Christian' worship in English schools should be abolished.

Last week the United Nations Committee on the Rights of the Child became the latest body to recommend that the UK repeal legal provisions for compulsory collective worship in publicly funded schools and ensure that children can independently exercise the right to withdraw.

This echoes the recommendations of a study by the former Education Secretary Charles Clarke and professor of sociology of religion at Lancaster University, Linda Woodhead, which similarly concluded that the current requirement should be abolished.

The 70-year-old statute on collective worship was drawn up before any human rights charters and fails to recognise that pupils have human rights too.

Inclusive assemblies can play an important role in fostering a sense of community in schools. Assemblies with an ethical dimension can promote shared values and aid pupils' spiritual, moral, social and cultural development. Acts of religious worship are neither necessary nor desirable to achieve these valid educational goals.

The law mandating worship in schools is an anachronism; the legacy of a society unrecognisable from the diverse and pluralistic Britain of today where citizens hold a wide variety of religious beliefs, and increasingly, no religious beliefs. It is also deeply unpopular, widely flouted and wholly incompatible with a genuine commitment to religious freedom.

We therefore urge you to implement the recommendation of the UN Committee of the Rights of the Child and repeal legal provisions for collective worship and ensure that pupils can independently exercise the right to withdraw from any acts of worship that are held in schools.