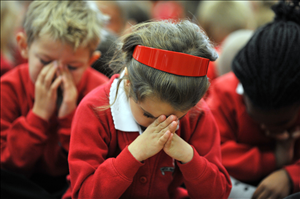 The National Secular Society has written to the Department for Education over concerns that the Church of England is using academisation to strengthen its influence in schools – over the objections of school governors.

Fresh concerns were prompted after the Diocese of Winchester announced that all its voluntary controlled (VC) schools had to join the Diocese's academy chain when the schools become academies, dramatically increasing the power of the Church over the schools.

The VC schools are to be prevented from joining any other academy chain and must sign up to the Diocese's "King Alfred Trust" even though the governors of one affected school are "unanimously" opposed "as they feel it will erase the distinction between VC and Voluntary Aided schools."

Voluntary controlled schools are generally considered to be less explicitly religious than voluntary aided (VA) schools. In VA schools, a majority of the governing body is appointed by the church to maintain "the Church of England character of the school."

In contrast, the church-appointed governors of a VC school are in a minority.

The loss of this distinction as VC schools convert to become academies has prompted "utter outrage" among headteachers of affected schools.

One headteacher told the National Secular Society that other headteachers of church schools are "furious that their schools are to be handed over en masse to the Diocese" and that no other conversion options will be considered.

The NSS wrote to the Department for Education, "In Hampshire approximately 60% of schools with a religious ethos are VC. If these plans go through, 73 schools who currently have a minority of church appointed governors will suddenly find themselves under the direct control of the Diocese."

A similar situation has occurred in Norwich, where the Diocese has stated VC schools will be required to "adopt a VA model of governance before being admitted to the Trust".

The National Secular Society told schools minister Lord Nash: "The NSS regularly receives contact from governors and staff at church schools who feel under pressure to replace the 'light touch' faith ethos they may feel is more appropriate to their school community with a more explicit ethos.

"We are also hearing from parents and staff at church schools concerned that academisation will lead to their diocese imposing a more rigorous religious ethos."

Given the volume of recent examples, the Society said it expected dicoeses to "routinely misuse" powers in an agreement between churches and the Government to block VC schools from choosing what multi-academy trust to join, in order to advance the church's "control and other policy aims."

It is a long-established principle "that the boards of VC schools are not wholly dominated by the Church," the Society wrote.

The NSS has now called on the DfE to require VC schools converting to academy status to maintain the balance of governors appointed by the Church and by other sources.

Stephen Evans, the campaigns director of the National Secular Society said of the plans: "The influence of the church in VC schools has traditionally been limited, but it's becoming increasingly clear that academisation is paving the way for the Church to strengthen its control over state education.

"With around a million pupils attending church schools, it will be a concern to many parents that the education they receive is increasingly being controlled by clerics.

"As the population drifts away from the church, the church is unabashedly looking to taxpayer funded schools to act as its pulpit, and many church schools converting to academy status and joining diocesan trusts may soon be asserting a much stronger 'Christian ethos' than they have done previously. This stands to benefit the Church, but not the local communities, parents and pupils that publicly-funded schools are supposed to serve."