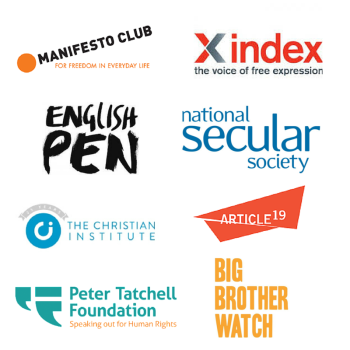 A broad coalition of campaign groups including the National Secular Society has warned that proposals contained in the Queen's Speech could criminalise a "wide swathe of speech."

Campaigners say the government's planned Counter-Extremism and Safeguarding Bill must be carefully crafted to avoid damaging freedom of expression.

"The government's move to counter extremism must not end up silencing us all," said Jodie Ginsberg, chief executive of Index on Censorship. "We should resist any attempts to make it a crime for people of faith to talk publicly about their beliefs, for political parties to voice unpopular views, and for venues from universities to village halls to host anyone whose opinions challenge the status quo. We urge the government to use its consultation to ensure this does not happen."

The government's plans to tackle extremism through a "new civil order regime" and other measures must not undermine the very values it aims to defend, free expression organisations said on Wednesday.

The proposals for a new law, outlined in the Queen's Speech, are more ambiguous than earlier proposals made by this government, but nevertheless leave open broad measures to police a wide swathe of speech and should be resisted, the groups said.

The new legislation will include giving law enforcement agencies new powers to protect vulnerable people – including children – "from those who seek to brainwash them with extremism propaganda so we build a stronger society around our shared liberal values of tolerance and respect", according to thebackground notes accompanying the Queen's Speech.

More specifically, the government proposals are to legislate:

· Stronger powers to disrupt extremists and protect the public.
· Powers to intervene in intensive unregulated education settings which teach hate and drive communities apart.
· A new civil order regime to restrict extremist activity, following consultation.
· Closing loopholes so that Ofcom can continue to protect consumers who watch internet-streamed television content from outside the EU on Freeview.

The new proposals should avoid creating an environment that could make it even harder for people of all faiths and ideologies to express their beliefs and opinions, the groups said. Current legislation already prohibits incitement to violence and terrorism, and a compelling case for broadening them further through civil measures has not been made.

"The government's move to counter extremism must not end up silencing us all," said Jodie Ginsberg, Chief Executive of Index on Censorship. "We should resist any attempts to make it a crime for people of faith to talk publicly about their beliefs, for political parties to voice unpopular views, and for venues from universities to village halls to host anyone whose opinions challenge the status quo. We urge the government to use its consultation to ensure this does not happen."

It is still not clear how new legislation would deal with the problem of defining "extremism" in a way that would not threaten free speech.

The government has previously defined extremism broadly as "the vocal or active opposition to fundamental British values, including democracy, the rule of law, individual liberty and the mutual respect and tolerance of different faiths and beliefs". The continued lack of a clear definition risks outlawing any political expression that does not reflect mainstream or popular views.

Britain already has a host of laws to tackle the incitement of terrorist acts, as well as racial and religious hatred. The government has previously been criticised for the broad definitions of "terrorism" in existing legislation, and the definition of "extremism" in the Prevent Strategy. The proposed bill must not introduce new vague terminology and widen the net even further.

"The government's approach to extremism is unfocused. Unless we can make them see sense, the range of people who could find themselves labelled 'extremist' by their own government is about to get a whole lot wider," said Simon Calvert of the Christian Institute.

The government is ambiguous on whether they are still considering "extremism disruption orders" or "banning orders" within the package of civil measures. Though the promised consultation is welcome, these draconian measures are clearly not off the table.

Baroness Manningham-Buller, former head of MI5, has said previously that extremists need to be exposed, challenged and countered. The proposed measures would have the opposite effect and should not find their way into the new civil order regime.

"Extremism banning orders could mean political activists – or any other activists deemed to be 'anti-democratic' – such as environmental activists – could be outlawed in future, thereby undermining democracy itself," said Jo Glanville, Director of English PEN.

Extremist disruption orders (EDO), suggested under earlier plans for the bill, could have a similar chilling effect on free expression and democracy. Under original plans for EDOs, the police would be able to apply to the high court for an order to restrict the "harmful activities" of an "extremist" individual. The definition of "harmful" could include a risk of public disorder, a risk of harassment, alarm or distress, or the ill-defined "threat to the functioning of democracy".

Keith Porteous Wood, Executive Director of the National Secular Society, said: "The prosecution thresholds for EDOs – as originally envisaged – are worryingly low – civil, not criminal – yet the consequences of granting of such an order, even if not broken, are likely to be very serious, e.g. rendering the recipient unemployable. Few faced with such a threat are likely to have the resources to mount any defence as proceedings will be at the High Court."

"No convincing case has been made for the necessity of new measures to restrict free speech. Existing measures are already deterring individuals and groups from engaging in open debate on important issues. The plans re-announced today, though watered down, do not sufficiently address criticism the government has received; they not only threaten to further chill legitimate speech, but may also fuel divisive ideologies and make us less safe," said Thomas Hughes, Executive Director of ARTICLE 19.

Governments across the world – such as Russia, Turkey and Egypt – are increasingly using national security laws to censor free expression, including in the media. The government's moves are likely to legitimise and embolden these efforts, setting a counter-productive example.

UN and regional human rights experts have jointly raised concerns regarding the potential impact of broadly defined initiatives to counter violent extremism on the free expression of minority and dissenting views. They have called for responses to violent extremism to be evidence based, and to respect international human rights law on freedom of expression and non-discrimination.

Conclusion
We call on the government to consult widely with all stakeholders, including civil society and minority groups, to ensure that a bill intended to tackle extremism does not undermine one of the values at the heart of democracy: that of free speech for all.