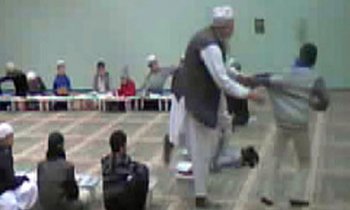 Ofsted has found over 50 suspected illegal faith schools since January, prompting renewed fears about thousands of children being taught in unregistered schools with no oversight.

A disproportionate number of the schools, one-third, were Islamic and one-in-six were Christian or Jewish. Ofsted chief Sir Michael Wilshaw said the institutions were "putting children at risk of harm, including the risk of exposure to extremism and radicalisation."

Sir Michael told Education Secretary Nicky Morgan that he was "extremely concerned about the number of children and young people attending these schools who may be at significant risk of harm and indoctrination."

The effort to identify the unregistered schools was undertaken by "a new taskforce within Ofsted" set-up explicitly "to investigate suspected illegal schools and pursue those individuals responsible for operating them."

Seven inspectors identified 100 illegal 'schools' in less than five months, but Sir Michael said that the number found already "is likely to represent only a small proportion of the illegal schools operating across the country."

The Ofsted chief said that the number already found confirmed his fear that "there are many more children hidden away from the view of the authorities in unregistered schools across the country than previously thought."

Seven warning notices have now been sent to the suspected illegal schools and Ofsted has said it will support the Crown Prosecution Service in "vigorously" pursuing cases against those who run unregistered schools.

The Chief Inspector also issued a warning about parents using home schooling as a cover to send their children to illegal faith schools.

Sir Michael wrote that local authorities need to show "vigilance" to make sure suspected illegal schools are identified "as quickly as possible."

Bradford Council was recently accused of being in "denial" over illegal religious schools – which can allow extremism and separatism to ferment.

In the Queen's Speech the Government announced that it will "consult on powers to enable government to intervene where councils fail to tackle extremism."

The Government has also said it will stand up for "our liberal values" by "taking on the extremists" and "protecting young people in unregulated schools," plans which were welcomed by the National Secular Society.

Stephen Evans, NSS campaigns director, said: "It is very welcome that action is being taken now, but it has been far too slow and a generation of children have already passed through these so called 'schools'. Many of those pupils will have been denied a secular education, indoctrinated or exposed to extremist and separatist ideas, so for those pupils this action has come too late.

"This isn't just about security and extremism. These children all have the right to a proper education. Society has failed to protect that right."

Concerns about Jewish children disappearing from the education system were raised by the Jewish Chronicle as early as 2008.

See also: Allowing children to languish in illegal religious 'schools' is the bigotry of low expectations.