NSS: Efforts to better integrate religious minorities must include a reappraisal of faith schools 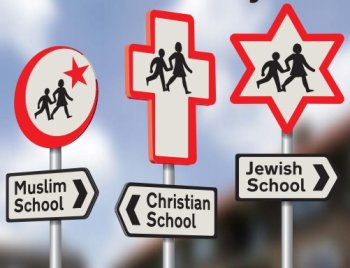 The National Secular Society has welcomed comments from Trevor Phillips calling for the "active integration" of religious minorities but warned that this cannot be done without tackling faith schools.

The former head of the Equality and Human Rights Commission says the UK must plan for the social consequences of 'superdiversity' and change, and warns that a laissez-faire approach to differences in and between communities is "dangerously misguided" and risks allowing the country to "sleepwalk to a catastrophe".

In a new pamphlet published by Civitas, Trevor Phillips says that Britain is too complacent about its ability to manage diversity and urgently needs to adopt a "more muscular" approach to integration.

In a searing critique of the "smugness" about the 'success' of multiculturalism, Phillips warned that the "organic integration" of religious and ethnic minorities would not succeed without societal confidence in shared values and time to allow integration to take hold. "In the 21st century, these qualities are both in short supply," he said.

The National Secular Society said Phillips was raising legitimate concerns but warned that "without tackling faith schools and the segmentation of education along religious and de facto ethnic lines, this problem will be insoluble."

"Modern Britain is one of the most religiously diverse countries in the world, and home to more non-believers than ever before. Religious conflict and sectarian grievances have the potential to tear our society apart, so we cannot afford be complacent about social cohesion. Our system of state-sponsored faith schools is a significant and growing part of the problem, and runs the obvious risk of worsening social fragmentation".

Phillips said that all schools, including minority faith schools, should be given a "duty to integrate" and "demonstrate that they are making efforts to give their pupils a real experience of living in a diverse society".

Mr Evans said: "It's not at all clear how a system designed to segregate children by religion can be plastered over with a new duty handed down by government.

"Making faith schools more 'inclusive' will simply mean some children are educated in a school with a religious ethos that runs counter to their own and their parents' wishes. Clearly this is problematic from a human rights perspective. Rather than paying lip service to cohesion and diversity, what's really needed is a complete reappraisal of the whole concept of faith schools and a move towards inclusive secular schooling for all.

"Reversing the expansion of faith schools is not a silver bullet, but at the very least government policy should not serve to exacerbate the problems over integration as faith schools do."

"We welcome Trevor Phillips' calls for more active efforts to integrate society, but in this area he seems strangely reluctant to not follow his own argument to its logical conclusion."

Race and Faith: The Deafening Silence, includes critical commentary on his proposals, and the writer Jon Gower Davies said that racial diversity presented no huge obstacle, but that "What is likely to make the lives of my children and grandchildren dangerous and perhaps catastrophic, is religion, indeed one religion, Islam".

Gower said that "Islam is indeed a singular and very serious problem, and should not be considered under the general rubric of multiculturalism".

In response to Gower, Phillips said "faced with a religion unused to having its adherents form a small minority in a society, we all have to work much harder than in the past."

In the book, Phillips has also argued for a liberalisation of free speech in the UK. Regardless of "incompatible attitudes" about gender, sex, religion and the limits of free speech, he wrote, "Parliament should take the opportunity in this administration to renew and formalise a presumption in favour of freedom of expression."

He added that society should "dial down the anxiety about diversity, ignore the angst about Islamophobia. Superdiversity calls out for honest and open speech."

The NSS particularly welcomed Phillips' defence of free speech and his call for "the accretion of limitations and caveats on freedom of expression to be swept aside and replaced by legislation ensuring that only speech and gestures that directly encourage physical harm are subject to legal restriction."

Mr Evans added, "there is troubling ambiguity in Britain's laws about what exactly freedom of speech means in practice. Worryingly a senior police officer shared a post online that said 'freedom of speech does not mean freedom of offending culture, religion or traditions.'

"The law on free speech needs to be liberalised and made much clearer – particularly if senior police officers do not even know what freedom of expression protects.

"Phillips is absolutely right that this is a vital topic for discussion which is alarmingly neglected, and this is an important contribution. The Government must take these entrenched, long-term problems seriously. Sadly faith schools still seem to be a no-go area."