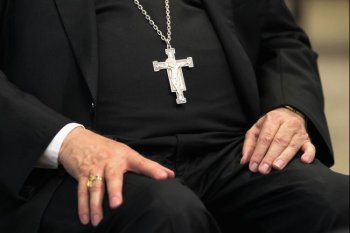 A top Benedictine monk who has been accused of child abuse has been arrested after five years on the run.

Laurence Soper, now 72, former abbot of the Benedictine Ealing Abbey, was arrested in Kosovo on Wednesday 11 May. He faces serious allegations of child abuse allegedly carried out at St Benedict's school in Ealing, west London, where he taught between 1972 and 1984. The fee-paying Catholic school is attached to Ealing Abbey where Soper was abbot from 1991-2000.

In 2009, a former headteacher of St Benedict's school was jailed for eight years for abuse spanning 36 years. Both were named in a highly critical report into abuse at the School prepared by Lord Carlile QC.

Soper had been the subject of a European Arrest Warrant since 2012, following his failure to return to a police interview in London in 2011 in the expectation that he was about to be arrested.

By that stage, Soper had served for ten years as worldwide treasurer of the Benedictine Order in Rome and had been responsible for major reforms to the Order's finances. Before becoming a monk he had worked for Barclays Bank.

Neither Kosovo, nor Montenegro where he had reportedly previously been spotted, are part of the EU, so are not subject to the European Arrest Warrant obligations. Attempts are now being made to have him returned to the UK. He was living under an assumed name and appears to have been a lodger in a house and was not employed.

Keith Porteous Wood, Executive Director of the National Secular Society commented: "When Soper was bailed, investigators neither took a picture of him nor required him to surrender his passport. Could this have been simply because he was a cleric? Soper was able to return to the Vatican from outside the EU and empty his bank account there without the police being alerted; was this despite or because he was a high-profile figure in the Church? We hope investigators will establish the answers to these questions and whether Soper received any assistance to remain a fugitive for so long."