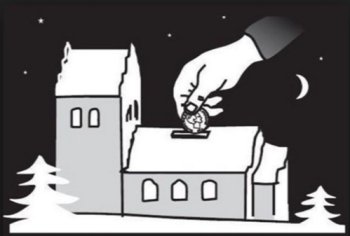 The Danish Atheist Society has launched a bus advert campaign and website to show Danish citizens how to withdraw from the Church of Denmark ­and avoid the Church tax levied on members.

Danish citizens have to pay the 'Church tax' if they are affiliated with the church, and it can take up to 1.5% of their income. All baptised Danes are automatically made members of the church, making them liable for the tax, though Christian Today reports that just 2.4% of these members actually attend regularly.

To help people avoid this unfair taxation, the Danish Atheist Society has launched a bus advert campaign, and a website which helps people disaffiliate from the church and which sends the required documentation to the Church directly.

Around 3000 people have now used the website to withdraw from Denmark's established church, which will save them each around 133,000 kroner in tax (£14,200) over the course of their lifetime.

Anders Stjernholm, a spokesperson for the Danish Atheist Society, said that the group was "satisfied with [the] results so far. The bus campaign invites a discussion about faith, while the withdrawal campaign is aimed at the many Danes who have long thought about leaving the church but have not done so because it is too much trouble."

In addition to the specific church tax, all citizens fund the church indirectly, regardless of their religious affiliation, as the government gives direct financial assistance to the organisation.

However, the Church has criticised the Danish Atheist Society's campaign. Thomas Frank, Dean of the Diocese of Viborg, said: "I have nothing against campaigns that encourage discussions about faith, but providing tools for withdrawal such as Atheist Society's website is, for me, wrong and ill-mannered."

The loss of tax funds from 3,000 members is about 9 million kroner per year, equivalent to nearly £1 million in lost revenue.

NSS Campaigns Director Stephen Evans said: "It's not at all surprising that Danish citizens are cancelling their church membership. Nobody should be auto-enrolled into a religion, particularly when it comes with the imposition of a church tax to fund an institution that you may not support.

"In secular democracies churches have to learn to stand on their own feet and not rely on unwilling citizens or the state for financial support. That goes as much for the Church of England here as it does the Evangelical Lutheran Church in Denmark."

In December 2015 thousands of Icelanders registered as members of an ancient religion based on the Sumerian gods in order to avoid a religious tax. All Icelanders must register a religious affiliation and pay a tax that funds the religious denomination to which they belong. To escape this over 1% of Iceland's population registered as Zuists, after leaders of the 'faith' pledged to redistribute the state funding they received back to the church's members.

Earlier in 2015, 200,000 Germans filed declarations renouncing their membership of the Protestant church after a change in tax laws. As in Denmark, Germans baptised in childhood automatically become members of the church and have to pay a tax to fund religious activities. Anybody who opts out of this has to pay a fee to the German government.