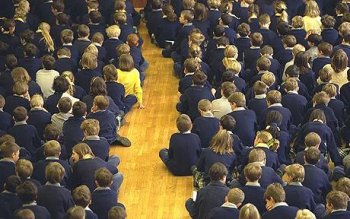 A cross-party group of MPs has called on the Government to make faith school admissions more inclusive and bolster social cohesion.

Five parliamentarians from the Conservative Party, Labour Party, Liberal Democrats and Green MP Caroline Lucas have signed the Early Day Motion which aims to tackle exclusive admissions policies which discriminate on the grounds of religion.

The motion calls on the House of Commons to acknowledge "that mutual trust and understanding between people of different backgrounds grows when they are schooled together, which also benefits social cohesion in society at large".

The motion "therefore urges that the current policy where new faith free schools in England cannot select more than half their pupils on faith grounds is extended to all types of state-funded faith schools."

NSS Campaigns Director Stephen Evans urged supporters of the National Secular Society to write to their MP asking them to sign the motion.

"It's vital that the Government come to understand the long-term damage to society being caused by social segregation. School is a chance to build a more cohesive future. Sadly we're squandering that opportunity.

"If you want to see a more cohesive society, without the division of exclusive faith schools, this is a good place to start."

In 2005 Barry Sheerman, an honorary associate of the NSS, warned about the rise of a "ghettoised education system" and said that "Schools play a crucial role in integrating different communities and the growth of faith schools poses a real threat to this. These things need to be thought through very carefully before they are implemented."

In 2015 Demos said that there was de facto ethnic segregation in minority faith schools and that many British schools are "highly segregated" with some faith schools effectively excluding other ethnic groups.

Early Day Motions (EDMs) are rarely debated in the House of Commons but allow parliamentarians to draw attention to particular areas of concern. Mr Evans added that it was "important to take every opportunity to highlight the problems caused by dividing our education system along religious lines."

Write to your MP here.