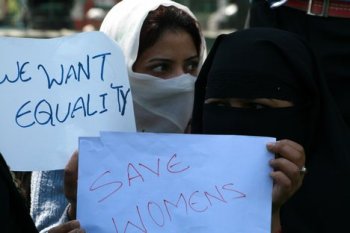 Legislation to protect women and promote gender equality in Pakistan and Nigeria have generated a huge religious backlash – with Muslim and Christian senators saying the Nigerian law was an attack on religion.

The Nigerian Senate rejected a bill aimed at eliminating "all forms of discrimination" against women. The Gender and Equal Opportunity Bill would have given widows the right not to be subjected to "inhuman, humiliating or degrading treatment" and given them equal child custody and inheritance rights. The BBC reports that one Muslim senator told them it is "unacceptable" to change that under Islam women only inherit half of what men claim. Muslim senators said the bill was unacceptable because it contradicts sharia law.

The legislation would have introduced 18 as the minimum legal age for marriage. Almost half of Nigerian girls are married before they reach 18 years of age.

A petition has been launched in Nigeria urging the Senate to reconsider.

"The bill helps create equal rights for women to stop being discriminated against in marriage, the workplace, inheritance, land ownership and freedom of movement," the petition reads.

"Passing of this bill will help recognize the equality of women in spite of religious dogma, patriarchal culture, cultural taboos and traditions regarding the unfair treatment of women and girls."

Meanwhile, proposed legislation in Pakistan would set up Protection Committees for women reporting domestic or sexual violence, incorporating officials from local government, the police and the social welfare department.

The BBC reports that it would also set up shelters for the most vulnerable women and set-up a helpline.

Pakistani Islamic groups have said the law is "un-Islamic" and more than 35 religious groups, "including all the mainstream Islamic political parties" have condemned the law and threatened severe civil disobedience if the measure is not withdrawn.

The organisations said the act would "add to the miseries of women" and that the law was "promulgated to accomplish the West's agenda to destroy the family system in Pakistan".

The leader of the Jamiat-i-Ulema Islam party has claimed that the Prime Minister has "promised to amend the law so that it doesn't contravene the teachings of the holy Koran."

Naeem Mirza of the Aurat Foundation said that under the plans, "A woman can ring up a toll-free number for help, women protection officers can enter any premises to rescue her, and the husband is constrained by the law from throwing her out of his house. If he remains violent, he can be turned out of his house, and forced to wear a GPS tracker to ensure he doesn't get anywhere near the victim until a settlement is reached.

"If implemented, these measures will fundamentally change the traditional power equation between men and women, something which the religious lobby will find hard to tolerate."

Pakistan is the third most dangerous country in the world for women, a 2011 Reuters poll found.