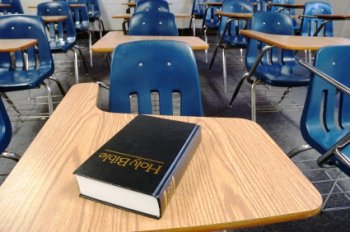 Four non-religious schools are to be merged with a CofE primary under a single academy trust controlled by the Church of England, in a move described as a "takeover".

The local press report that the proposals have attracted criticism from the local MP, parents and councillors, and prompted concern from Newcastle City Council.

Nick Brown MP said he had "concerns" about the plans which would see "Church of England appointees as a majority of the academy trust's members, despite only one of the five schools being a Church of England school." The Newcastle East MP has said he will campaign against the proposals.

One local councillor said the change was undemocratic and against the wishes of parents who have their children at the non-religious schools.

"The Church are saying this is not a takeover by them but then if it isn't that, what is it?"

Councillor Dave Wood also raised concerns about the consultation process and said that "Councillors opposed to the move were not consulted at all directly and parents have said they do not want the schools to be taken over."

The Newcastle Diocesan Education Board has claimed that the community schools involved will have their individual ethos protected under the multi-academy trust – a guarantee sought by the National Secular Society from the Department for Education when the NSS first raised the alarm about religious groups using academisation to takeover non-religious schools.

Stephen Evans, campaigns manager of the National Secular Society, said, "This is exactly what we warned would happen. The Department for Education reassured us that individual schools would be protected if taken over by a religious multi-academy trust, but this board will have three of five seats filled by representatives of the Church of England. How can non-religious schools realistically be protected from an encroaching religious ethos if the most senior people in the trust are all advancing the interests of the Church?

"It is hard enough for parents to secure a neutral, non-religious education for their children without the Church taking over whole academy trusts. It's intolerable that the Church should be allowed to further its own interests by gaining greater influence over children's education and at the public's expense."

Mr Evans said the safeguards in place to protect non-faith schools joining faith-based Multi Academy Chains were "wholly inadequate" and warned that there was nothing to stop non-religious schools entering into such chains from applying for a religious designation provided they gained the approval of the Secretary of State.

Newcastle City Council said that it had "concerns about the impact that these changes could have across the family of schools within the city and on the ability of the local authority to carry out its statutory duties, such as responding to and meeting future and changing needs of the local population."

A spokesperson for the council said that it wanted "assurance" that if the trust were established it would "follow local arrangements regarding a fair approach to school admissions."

The takeover is coming shortly after the Archbishop of Canterbury boasted of the Church's continued influence over the education of more one million children through state-funded schools.

A 2015 report released by the Church of England and discussed at the recent General Synod said that the Church had an "urgent need" to focus evangelism on children, young people and their parents in light of a catastrophic collapse in adult church attendance.

The National Secular Society is regularly contacted by parents, teachers and governors concerned about a push by religious groups to assert a much more aggressive religious ethos in faith schools. One parent governor told the NSS recently that he felt very "uncomfortable" about an "aggressive new push to convert children".