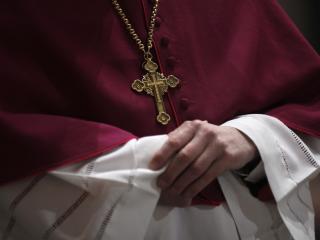 A report leaked to the Guardian has exposed extraordinary risks taken with the health of female patients by forcing them to undergo unsafe miscarriages.

According to a report by a former health official the implementation of this religious guidance has resulted in serious risks being taken with women's health.

The report, made public for the first time, considers the cases of five female patients from Michigan and accuses Mercy Health, a Catholic healthcare provider, of making women endure dangerous miscarriages instead of providing reasonable medical alternatives.

According to the report, Mercy Health has made what the Guardian has described as "unilateral healthcare choices for … five women without their knowledge or their consent."

Many other cases like this have been reported. In 2010 an Arizona woman suffered "life-threatening complications" after hospital administrators told her that she could not have an emergency termination because the foetus still had a heartbeat, despite just a "miniscule" chance of the foetus surviving.

She was told that continuing with the pregnancy would put her at risk "of severe bleeding and infection" and that she needed to have an emergency termination of the pregnancy but that the hospital would not perform the procedure because doctors had to "abide by the church's ethical and religious directives." She had to be sent to a different hospital, causing a three-hour delay.

Catholic control of American hospitals and influence in the American healthcare system has significantly increased in recent years. Between 2001 and 2011 there was a 16% increase in the number of US hospitals affiliated with the Catholic Church.

"The universally-accepted code of medical ethics places patient autonomy, i.e. personal control over what happens to a patient's own body, as the bedrock of good medical practice. Maternal mortality is not a spectre from the past but an ongoing, largely preventable tragedy that accounts for the death of a woman somewhere in the world approximately every 2 minutes. Preventing women from exercising choice about what happens to their own bodies is bad enough in the case of normal pregnancies but when complications arise which place women at increased risk of dying there should be no question that women should be fully informed about the safest, medically-recommended, evidence-based course of action. It would appear that in these cases, the course of action that would ordinarily be recommended by doctors has sometimes not even been discussed with the patient herself for fear of deviating from Catholic doctrine.

"We have seen similar tragedies nearer to home such as the case of Savita Halapannavar, the non-Catholic Irish dentist who died of a protracted, complicated miscarriage in an Irish hospital on 28th October 2012 shortly after being denied a necessary abortion and being told by religiously-motivated healthcare professionals that 'This is a Catholic Hospital'."