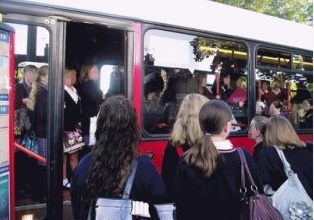 The National Secular Society has welcomed news that a 'discriminatory' school bus policy, which gives Catholic pupils free travel but makes non-Catholics pay, is to be reviewed by Flintshire Council.

Pupils at the St Richard Gwyn Catholic High School in Flint are currently given a free bus pass if they live over three miles away from the school. However the pass is only given to Catholic pupils, and non-Catholic children are made to pay for the bus or use other more expensive travel options.

To receive the pass pupils are expected to provide "suitable evidence of adherence to the faith of the school such as a baptismal certificate or a letter from a priest".

The bus is run by the Council and the school's headteacher has now said that the policy should be changed. He told the BBC that he wished "they would scrap it."

One parent said it was blatant discrimination and that pupils "stand at the same bus stop [and] wear the same uniform" but some are made to use "non-Catholic" school-run minibuses, which are more expensive, or pay £55 for the service that Catholic pupils can access for free.

The division in the school caused by the scheme has seen the bus labelled the "Catholic bus" by pupils and parents.

Flintshire Council said that all of their "discretionary transport provision and policies are currently subject to a review." A consultation on the proposals prior to it being introduced in 2013 saw 85% of 638 respondents strongly disagreeing with the plans.

The National Secular Society previously warned Flintshire against adopting such a discriminatory policy and said it was very pleased to learn it is to now be reviewed.

NSS campaigns manager, Stephen Evans, commented: "Once children have been accepted into a school it's reasonable to expect that any assistance they receive for transport arrangements to and from that school are equitable and non-discriminatory. It is absolutely wrong that children are being treated differently purely on the basis of their or their parents' religious beliefs or activities."

The NSS has again written to the council urging it to amend the policy to remove the distinction between pupils of Catholic and non-Catholic faith.

School transport arrangements have a special exemption from Equality Act provisions prohibiting discrimination on grounds of religion or belief.

The publicly-funded St Richard Gwyn Catholic High School also prioritises both children from Catholic and other faith backgrounds over children of non-religious parents in its admissions arrangements.