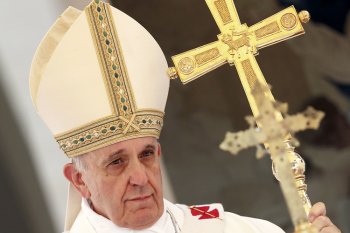 A liberal international Catholic group has criticised the Pope for misrepresenting secularism in a joint declaration he issued with Patriarch Kirill of the Russian Orthodox Church.

Their joint declaration, following the first meeting between a Pope and the leader of the Russian Orthodox Church for a thousand years, said that "very aggressive secularist ideology" sought to "relegate" Christians to the "margins of public life."

They were "concerned about the situation in many countries" and particularly worried about what they described as "the transformation of some countries into secularized societies, estranged from all reference to God and to His truth."

In response to this, the president of US-based Catholics for Choice, Jon O'Brien, said that they "misrepresent the true meaning of secularism."

"A secular society is not one in which one religion or religious belief is in any way oppressed, but one in which all citizens can practice as they see fit," he countered.

"In a secular society, we can have freedom of religion and freedom from religion. True religious freedom respects the rights of others to practice or not as they see fit. It does not [favour] one religion over another and it does not force other religions to adhere to a particular religious belief. You cannot have freedom of religion without freedom from religion—it is a two-sided coin."

The declaration also stated restated both leaders' commitment to marriage as being solely "between a man and a woman" and said that they regretted "that other forms of cohabitation have been placed on the same level as this union". The joint statement claimed that "paternity and maternity as the distinct vocation of man and woman in marriage is being banished from the public conscience."

In response to this, O'Brien argued that Pope Francis and Patriarch Kirill were trying to impose their beliefs on others: "Religious leaders have the right to express their opinion, but the right to decide about one's own life choices is one that rests with individuals. The state should not be party to coercive practices that seek to elevate one person's theological view or personal opinion above the rights of individuals.

"It is ironic that within both the Orthodox and Roman traditions, majorities of believers all over the world do not agree with these religious leaders and have continued to use birth control and abortion in good faith … a global survey of Catholics found that 66 percent believed that abortion should be permitted in some or all circumstances. Having failed to convince their own communities to adhere to their perspective, both leaders are trying to influence laws to deny fundamental rights. Such an imposition over law would have a devastating effect on the poor, who do not have the financial means to overcome barriers to health the ways that the rich can."

In a video recently produced by Catholics for Choice on behalf of the Global Interfaith and Secular Alliance, O'Brien warned that "time and time again" conservative interpretations of religion were being used to deny people their human rights.

"We need to stand up against religious extremism," he argued. "The idea that Government would be used to help religions discrimination against people's freedom is just downright fundamentally wrong."

"Religion… can't get to dominate public policy," he concluded.