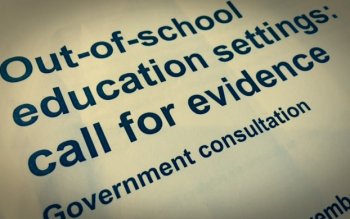 The National Secular Society has expressed broad support for Government plans to safeguard children and young people who attend "out-of-school education settings", including madrassas, with a system of registration and inspection.

The NSS, which first raised concerns about child welfare in supplementary school settings with the Government in 2011, described proposals to tackle the problem as "long overdue but very welcome."

The Government has been consulting on plans to enable action to be taken where out-of-school educational settings are failing to safeguard the welfare of children, which includes failing to protect them from the harm caused by extremism. The proposal will cover settings providing "intensive tuition, instruction or training" where children attend over six hours per week, including evenings and weekends.

The proposals outlined by the Department for Education will require supplementary schools to carry out background checks on staff and prohibit corporal punishment on out-of-school educational settings – a move long called for the by NSS.

The NSS's response highlighted reports of over 400 allegations of physical abuse in British madrassas between 2008 and 2011, revealed by freedom of information requests carried out by the BBC.

The response also welcomed plans to crack down on "undesirable teaching", stressing that "children in any educational setting should not be subjected to extremist teaching and indoctrination into hateful, intolerant and misogynistic ideologies."

However, the NSS warned that the regulation of out-of-school settings should be focused through the lens of safeguarding rather than security. It also reiterated the need to strengthen and empower civil society responses to extremism and sectarianism, and be mindful of genuine religious freedom concerns.

It is thought that just under a half of British mosques, from which madrassas are often run, are under the control of the ultra-conservative Deobandi movement, with a further 6% estimated to be influenced by Saudi Arabian Wahhabism. The NSS expressed hope that registration coupled with risk-based, rather than routine, inspections of madrassas would empower parents who had previously been worried about raising concerns with their mosque.

Despite recognising a particular problem with some Islamic out-of-school settings, the NSS response noted that other faith-based settings have "the clear potential to incubate divisions and indoctrinate children with views that run counter to British values rooted in human rights."

The Northern Council of Mosques, an organisation which represents 400 mosques, has said the plan "unduly encroaches on the legitimate right of faith providers to teach their children their faith" and that they "unequivocally" reject the proposals to register madrassas. Christian pressure groups have also warned that plans pose "a huge challenge to Christian freedoms".

The NSS restated its commitment to religious freedom in the consultation, but Stephen Evans, the National Secular Society's campaigns manager, rejected the "alarmist" and "vastly overblown" claims from some religious groups that the proposals amounted to an "attack on religious freedom."

In its consultation response the NSS argued: "The state has a duty to protect and uphold children's rights - to ensure that each and every child is safeguarded from harm and gets the best possible start in life. It should fulfil its duty equally for all children and young people, regardless of their religious background."

Mr Evans added: "Out-of-school educational settings, including religious supplementary schools, are a poorly regulated area and there is clear evidence of need for a new system of registration, regulation and inspection to ensure that children in such settings are safeguarded.

"The teaching of intolerance and violence in out-of-school educational settings has the clear potential to cause irreparable damage to the minds of young people and to wider society. It's right that the Government seeks to address this.

"Religious freedom is not absolute and the Government's willingness to balance parental rights and religious freedom against children's' and young people's independent rights – as well as wider societal interests – should be welcomed."

The Government has also insisted that the proposals are "not about regulating religion or infringing people's freedom to follow a particular faith or hold particular beliefs."

"Through this proposal, we are seeking to ensure that those who work in positions of trust and influence with children and young people respect those with different faiths and beliefs and do not, in expressing their individual beliefs, promote intolerance against others," it stated.

In his speech to the 2015 Conservative Party conference, Prime Minister David Cameron told delegates: "If an institution is teaching children intensively, then whatever its religion, we will, like any other school, make it register so it can be inspected."

The National Secular Society's full response to the consultation can be read in full here.