Church of England collapse strengthens the case for a secular UK 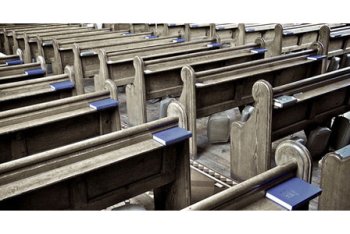 Weekly attendance at Church of England services has fallen below 1 million for the first time – bolstering the argument for a secular state.

New figures released by the Church show that just 1.4% of England's population attend Sunday services with the Church of England. 980,000 people attend church each week, based on figures from a survey carried out in October 2014, and there has been a 12% decrease in church attendance in the past ten years; equivalent to an average decline of little over 1% a year.

Keith Porteous Wood, executive director of the National Secular Society, commented: "Church of England attendance now appears to have fallen well below 2% of the population, and looks set to fall further given the preponderance of older churchgoers. This seriously calls into question its privileged access to political power and right to remain the established church. Indeed, it is inappropriate for there to be any established religion in a modern pluralistic society, far less one where the majority do not consider themselves to be religious."

Justin Welby, Archbishop of Canterbury, said that there was an "anti-Christian culture" but added that while "many talk of the post-Christian society" the Church of England "educates more than a million children in our schools."

The Archbishop claimed that the "Church of England is still a primary source of leadership for communities" but that culture in the UK was "becoming anti-Christian, whether it is on matters of sexual morality, or the care for people at the beginning or the end of life."

Mr Wood said that "Adults continue to turn away from the church in droves, and even many of those who consider themselves Christian reject the Church's policy on ethical matters such as same sex marriage. Sunday schools have all-but disappeared, so the Church is determined to force its influence on the population though faith schools – and is only able to do this because the running costs are paid from public funds."

Addressing the most recent measure of the collapse in Anglican church attendance, the Bishop of Norwich, the Rt. Revd. Graham James, said he did not expect the trend to change soon, but denied that the decline was inevitable. "We lose approximately 1% of our churchgoers to death each year. Given the age profile of the CofE, the next few years will continue to have downward pressure as people die or become housebound and unable to attend church."

Polling by YouGov around Easter of 2015 found that 62% of Britons says they are "not religious".