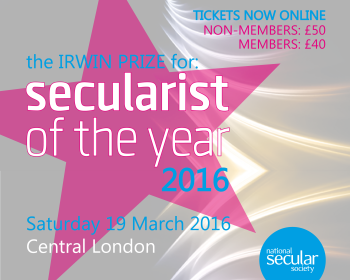 Tickets are now on sale for Secularist of the Year 2016, to be presented by broadcaster and columnist Julia Hartley-Brewer, and the National Secular Society is seeking the public's nominations to receive the prize.

National Secular Society president Terry Sanderson said: "Secularist of the Year has given us the opportunity to celebrate a wide range of secularist human rights campaigners and stand in solidarity with important causes such as the rights of women and girls everywhere to access education and the right of students, activists and journalists to speak freely without the enforcement of blasphemy taboos."

The £5,000 prize for Secularist of the Year is awarded annually and sponsored by Dr Michael Irwin. Mr Sanderson said that he hoped to receive a record number of nominations again this year: "The Secularist of the Year can be a group or individual who has made a significant contribution to secularism and human rights in the last year, or who should be recognised for their work over years. We're looking for nominees who have worked on specific secularist campaigns and in a more strategic ways on important issues."

Nominations for next year's prize can be made via email or via our website or admin@secularism.org.uk. Emails should be titled 'Nomination' and include the name of the individual or organisation you would like to nominate with a brief description of why you think they deserve the award. Nominations close Tuesday 19 January.

This year's £5,000 prize will be presented by NSS honorary associate, broadcaster and columnist Julia Hartley-Brewer. Terry Sanderson said he was delighted Ms Hartley-Brewer would present the awards and that she would continue the "fine tradition" set by previous presenters and honorary associates such as Martin Rowson and Polly Toynbee, adding: "Secularist of the Year is one of my favourite events of the year and always a great opportunity to catch-up with members and supporters as well as the inspiring nominees."

Tickets for the event in Central London on Saturday 19 March are on sale now online at £40 for NSS members (£50 for non-members) which includes a three course lunch with a welcome cocktail on arrival. Tickets can also be purchased by sending a cheque payable to National Secular Society to 25 Red Lion Square, London, WC1R 4RL.

Previous winners of Secularist of the Year:

2015 Charlie Hebdo, for its courageous response to the terror attack on its Paris office and defence of secularism – presented by Martin Rowson, Guardian cartoonist and author.

2012 Peter Tatchell, for his lifelong commitment to the defence of human rights against religious fundamentalism – presented by Nick Cohen.

2011 Sophie in 't Veld MEP, for her work as chair of the European Parliamentary Platform for Secularism in Politics – presented by A. C. Grayling.

2010 The Southall Black Sisters group, for their support of black and Asian women's human rights, accepted by Pragna Patel – presented by Michael Irwin.

2009 Evan Harris MP and Lord Avebury, joint award for their work in the abolition of blasphemy law –presented by Richard Dawkins.

2006 Prof. Steve Jones, biologist at University College London and author of a number of books on evolution –presented by Dick Taverne.

2005 Maryam Namazie, for her work in defence of women's rights and the right to freedom of expression –presented by Polly Toynbee.

Note: Nominations were originally scheduled to end on Friday 29 January but were moved due to a scheduling conflict.