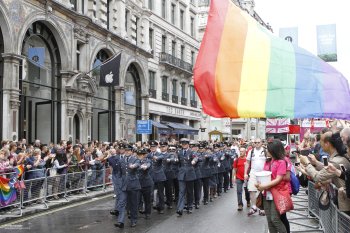 The National Secular Society has welcomed an intervention from Defence Minister Penny Mordaunt to ensure that the rights of gay military personnel wishing to marry are respected.

Regulations allowing same-sex marriages in the 190 military chapels in England and Wales came into force 18 months ago – but none of the Sending Churches using the chapels currently allow same-sex marriages to be conducted there.

Defence Minister Penny Mordaunt has now written to military chaplains to ask how "Parliament's sanction" will be "fully implemented".

News of the minister's intervention came in response to a written question from Madeleine Moon MP (Bridgend - Labour), a member of the Commons Defence Committee.

The National Secular Society has called for it to be made clear to all service personnel that if they want a same-sex marriage in a military chapel they can have one.

Keith Porteous Wood, NSS executive director, commented: "Military chapels are for the benefit of all military personnel, so it is discriminatory, as well as disingenuous to veto their use for same-sex marriages.

"The churches repay the privilege of being provided with chapels for their services paid for by the state by denying their use to those wishing to be lawfully married. Shamelessly blocking the use of military chapels to gay serving personal who want to marry also illustrates that the centuries-old persecution of homosexuals by the institutional churches is being actively perpetuated today by their leaders, despite support for same-sex marriage by the majority of those that identify as Christians.

"The only possible justification for such a veto, were if clergy who do not wish to solemnise same sex marriages were forced to do so, but the Marriage (Same Sex Couples) Act specifically exempts them from doing so against their will."

The NSS says that if chaplains don't want to conduct to same sex marriages they should be under a duty to find someone who will.

The position on armed forces' chapels differs from that of civilian religious buildings in that they are largely owned by the State and not by the religious organisations that use them. A small number of military chapels are owned by the Church of England and not covered by the regulations. The Defence Secretary is required to consult with Sending Churches before registering military chapels to be used for same-sex marriages. However they can legally block such registrations is unclear.