New report warns of ‘escalation’ in global persecution against non-believers 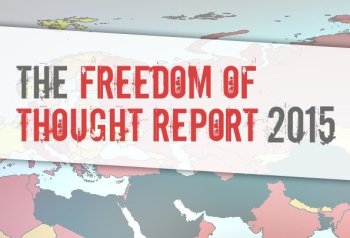 The International Humanist and Ethical Union (IHEU) has warned that worldwide "persecution of the non-religious has escalated" in the past year.

The 2015 "Freedom of Thought" report is the fourth annual study produced by IHEU that "records discrimination and persecution against humanists, atheists, and the non-religious, with a country-by-country assessment".

It found that "there has been a rise in extrajudicial violence" across the globe targeting secularists, atheists, humanists and critics of religion, and that in several states "harsher judicial sentences have been handed down for crimes such as 'blasphemy' and 'apostasy'."

The 2015 report highlights the "string of murders in Bangladesh" targeting secularists and non-believers, who were "hacked to death in machete assassinations. The victims were Avijit Roy, Washqiur Rahman Babu, Ananta Bijoy Das, Niladri Chatterjee, and most recently the publisher Faisal Arefin Dipon."

While these targeted murders have been "relatively well-reported", along with the case of Saudi secularist Raif Badawi, the Freedom of Thought report also highlights "less well-known cases, such as Egyptian student Sherif Gaber. In February this year, Gaber was sentenced to a year's hard labour for 'contempt of religion' (he had declared his atheism on Facebook) and for promoting 'debauchery' (he had challenged a lecturer who said that homosexuals should be 'killed in the streets'). Gaber went into hiding following the sentence this year."

Among many other examples, the report cites the case of another Egyptian student, Karim al-Banna, who was "arrested at an atheist cafe last November, and was this year handed a three-year jail term for 'insulting religion'."

IHEU have drawn attention to other under-reported stories, including the assassinations of three Indian rationalists in recent years, including two murders in 2015, and a spate of death sentences handed-out for apostasy in Saudi Arabia and Mauritania.

In one case in the Maldives, the report says that "the administrators of atheist Facebook pages were publicly identified, kidnapped by a 40-strong gang, compelled to 'recant' their atheism and hand over passwords to their accounts. Anti-atheist Facebook pages have forced many secular Maldivians offline throughout 2015."

The report notes positive developments in Iceland and Norway, both of which abolished blasphemy legislation in the course of 2015, but it paints a bleak picture of the global situation. IHEU say there is a "real and growing threat to non-religious people throughout the world, with people being imprisoned and murdered for expressing secular beliefs."

Bob Churchill, who edited the report and is IHEU's director of communications, said: "The world must recognise that to identify and speak out as non-religious is a basic human right, and the fact there are increasing numbers of people demanding recognition of this right is not a signal of moral decay but of a functioning, free society."

The National Secular Society is an affiliate of IHEU, which has recognised status at the United Nations as the umbrella organisation for non-religious, humanist and secularist groups. NSS campaigns manager, Stephen Evans, commented: "The world is seeing continuing struggle between secular democratic values and authoritarianism and theocracy. People of all faiths and none fall victim to those seeking to close down dissent, discussion and debate. This report is vital in setting out the full extent of discrimination and persecution faced by secularists and the non-religious; a topic that has, until now, been sadly neglected."

The Freedom of Thought Report 2015 can be downloaded here.