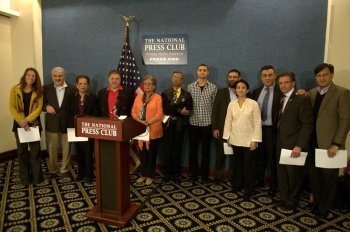 A coalition of Muslim writers, activists and politicians has launched a "Muslim Reform Movement" rejecting violence and calling for a defence of secularism, democracy and liberty.

The reformers have issued a Declaration defending gender equality, freedom of speech and freedom of religion, stating that they are for "secular governance" and "against political movements in the name of religion."

They have called for the separation of "mosque and state" and emphatically reject the "idea of the Islamic state".

Activists from the group stuck their Declaration of Reform on to the front door of the Islamic Centre of Washington, a mosque the movement described as "heavily influenced by the government of Saudi Arabia".

The preamble to the Declaration states: "We are Muslims who live in the 21st century. We stand for a respectful, merciful and inclusive interpretation of Islam. We are in a battle for the soul of Islam, and an Islamic renewal must defeat the ideology of Islamism, or politicized Islam, which seeks to create Islamic states, as well as an Islamic caliphate.

The signatories add that they "support the Universal Declaration of Human Rights, which was adopted by United Nations member states in 1948."

Rejecting violence, the preamble goes on: "Facing the threat of terrorism, intolerance, and social injustice in the name of Islam, we have reflected on how we can transform our communities based on three principles: peace, human rights and secular governance. We are announcing today the formation of an international initiative: the Muslim Reform Movement."

The founders of the group include Muslims and public figures from Canada, the UK and the United States, including Usama Hasan of the UK-based Quilliam Foundation.

The organisers are now calling for support from "fellow Muslims and neighbours".

The Declaration says the movement stands for "universal peace, love and compassion" and rejects "violent jihad".

"We stand for the protection of all people of all faiths and non-faith who seek freedom from dictatorships, theocracies and Islamist extremists."

The Muslim Reform Movement has committed itself to defending freedom of speech:

"Every individual has the right to publicly express criticism of Islam. Ideas do not have rights. Human beings have rights. We reject blasphemy laws. They are a cover for the restriction of freedom of speech and religion. We affirm every individual's right to participate equally in ijtihad, or critical thinking, and we seek a revival of ijtihad."

Farahnaz Ispahani, a former Pakistani politician and signatory of the Declaration, said: "If Muslim minorities in non-Muslim countries are to be protected, we must demand the protection of non-Muslims within Muslim-majority countries."

The Declaration also singles out gender equality and the protection of women's rights, stating: "We support equal rights for women, including equal rights to inheritance, witness, work, mobility, personal law, education, and employment. Men and women have equal rights in mosques, boards, leadership and all spheres of society. We reject sexism and misogyny."