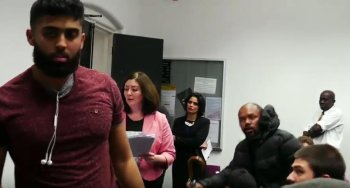 Protesters from the Goldsmiths University Islamic Society have heckled and aggressively disrupted a talk from ex-Muslim and feminist campaigner Maryam Namazie.

Ms Namazie was giving a speech on blasphemy and apostasy at the invitation of the Atheist, Secularist and Humanist Society at Goldsmiths University when several men from the Goldsmiths Islamic Society (ISOC) arrived and started disrupting the event.

The night before the event the president of the Islamic Society wrote to the ASH society saying "we feel extremely uncomfortable by the fact that you have invited Maryam Namazie. As you very well probably know, she is renowned for being Islamophobic, and very controversial."

The Islamic Society claimed that Namazie's attendance on campus was a violation of their "safe space".

They added, "we advise you to reconsider your event tomorrow."

Regardless of this the event went ahead, but protesters from the Islamic Society stormed into the room shortly after the talk started and began disrupting the event.

Ms Namazie said that "After my talk began, ISOC 'brothers' started coming into the room, repeatedly banging the door, falling on the floor, heckling me, playing on their phones, shouting out, and creating a climate of intimidation in order to try and prevent me from speaking."

The hecklers were asked repeatedly to be quiet and told by organisers that there would be an opportunity to ask questions or make comments at the end. The Muslim hecklers repeatedly interrupted the early part of the talk, shouting "safe space" and laughing.

When one female student tried to intervene the men shouted at her to "sit down".

University security were called and when Namazie displayed a 'Jesus and Mo' cartoon on a slide, one of the Muslim protesters turned the projector off to prevent the depiction of Mohammed from being shown.

At one point some of the hecklers appeared to laugh at the murder of secular Bangladeshi bloggers. Namazie challenged them: "Is it really funny that people get hacked to death? … I know it's funny for you."

Reza Moradi, a lecturer present at the talk, said that one Muslim protester "looked right into my eyes and with his finger, shaping hand like a handgun, touched his forehead" in what Moradi described as a "death threat".

After the event the Goldsmiths ISOC released a statement condemning the "vile harassment of our ISOC members (both male and female) by the Atheist, Secularist and Humanist Society (ASH)."

They said that "Muslim students who attended the event were shocked and horrified by statements made by Namazie".

Incredibly, the Goldsmiths Feminist Society sided with the Islamist protesters. They released a statement on 2 December expressing their "solidarity with Goldsmiths Islamic Society".

They said: "We support them in condemning the actions of the Atheist, Secularist and Humanist Society and agree that hosting known islamophobes [sic] at our university creates a climate of hatred."

Ms Namazie said that "The behaviour of the ISOC 'brothers' was so appalling that a number of Muslim women felt the need to apologise, to which I explained that no apology was needed from those who were not to blame."

She added: "Freedom of expression and the right to criticise and leave Islam without fear and intimidation is a basic human right. We have a responsibility to fight for these universal values at British universities and also across the globe."

Stephen Evans, the National Secular Society's campaigns manager, commented: "It's becoming very clear that the concept of 'safe spaces' is being abused to the point where it is becoming a direct threat to freedom of speech. Some students may find criticism of their religion offensive, but in an open and free society that does not give them the right to close down such discussion and intimidate those expressing their views.

"We urge Goldsmiths to condemn the intolerance shown towards Maryam Namazie and make clear to its students they do not have the right not to be offended."

Ms Namazie had previously been banned by Warwick University from speaking on campus, but the decision by the Student Union was quickly reversed after a high profile campaign and widespread criticism in the national press and on social media.