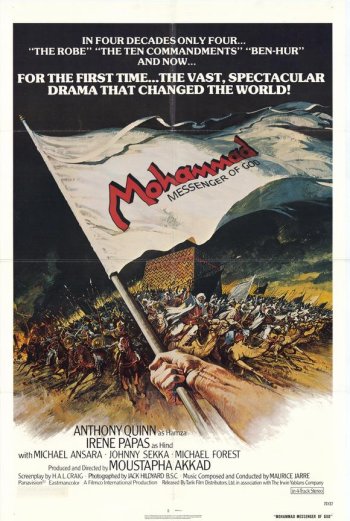 The National Secular Society has written to a Glasgow cinema urging it to reconsider its decision to cancel the planned screening of a biopic about Mohammed, after a small petition of Muslims from the UK, Saudi Arabia and Nigeria said it was "unacceptable".

The screening of "The Message" had been planned by the Islamic Society of Britain for 15 November at the Grosvenor cinema in Glasgow, but a petition was launched criticising plans to show the film, which is about the early history of Islam and Mohammed's life, because of non-Muslim actors playing the parts of some of Mohammed's contemporaries.

Mohammed does not appear in the film, but the petitioners complain that "it is still inappropriate and disrespectful", and that the Grosvenor cinema should therefore not host it.

While the depiction of Mohammed's companions by non-Muslim actions is their "main point of concern" they also say that the film cannot be shown because it "contains other inappropriate material such as music and dancing".

In its letter to the cinema the National Secular Society say that by refusing to show the film the cinema will be "contributing to a climate of censorship brought on by the unreasonable and reactionary views of some religious extremists".

NSS campaigns manager Stephen Evans said: "It's a sad sign of the times that such a small petition has forced the venue to cancel. We hope the cinema will change its position and not allow the weapon of offense to be used to restrict its freedom as a cinema to screen films and the freedom of audiences to watch them".

There are just 94 signatories to the petition, with comments supporting it posted from Saudi Arabia, Bahrain, Nigeria and Mauritius.

One petitioner said "the film has to be stopped". Many others said the content of the film was "not acceptable" and "inappropriate".

Another signatory said he was "insulted by the movie". One said he had signed "so that money hungry things don't use Islam as a means of becoming filthy rich".

The cancellation of the screening has also prompted condemnation from the Islamic Society of Britain, which expressed their "regret" at the decision which say had been taken "in the face of a small number of objections".

The Society added, "As Scottish Muslims we believe in the principles of freedom of speech and have worked for decades to promote the rights of people to make Islam relevant to British society. Everyone must have the right to live by their beliefs and we must learn to tolerate differences of scholarly opinion.

"These protestors demonstrate the worst elements of our community as they are imposing their beliefs on others. We will not be bullied by these people and challenge them to make themselves known. We are also appealing for the Grosvenor to stick to the original agreement and show the film."