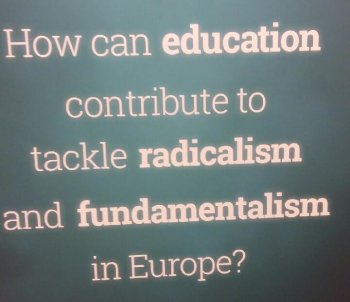 The NSS has told top-level European officials of the positive role secular education can play in building a shared future and challenging religious intolerance across Europe.

In a keynote address at the European Parliament, given at the invitation of Vice President Antonio Tajani MEP, the National Secular Society warned that the UK's "highly segregated" education system – and faith schools in particular – undermine social cohesion and fuel religious separatism.

The wide-ranging speech, given by the executive director of the NSS, Keith Porteous Wood, raised concerns about the "missed opportunities" to use the education system to break down barriers in society and reduce the tensions and isolationism that can feed both Islamist radicalism and other forms extremism, including anti-Muslim bigotry.

Noting the serious challenges faced across Europe, Mr Wood discussed how "conservatism has grown in recent decades among some Muslim groups" and how "Saudi-funded" Wahhabism was reinforcing a "trend of greater conservatism" in many British Muslim communities. This was fuelling significant challenges for intergenerational and intercultural relations, which an inclusive education system could help young people to navigate, he said.

In his speech he noted evidence that suggested younger Muslims were more socially conservative in their attitudes and less liberal than older generations, warning that without positive efforts to integrate young Muslims into society through shared education, many would grow up in isolation from wider society and "identify themselves primarily with their religion" rather than their wider community.

Continuing, he said, "My comments about religious conservatism and separatism do not just apply to Islam. There is increasing pressure in the UK for more minority faith schools, with orthodox Jewish, Sikh and Hindu schools now all being funded by the state.

"Some minority faith or denomination schools in the UK teach narrow curriculums and promote religious dogma over key scientific principles that clash with their worldview. Teaching about evolution theory, sex education and even human biology is restricted in some UK schools on religious grounds. This is an affront to children's independent rights, which even in older children seem to be given too little weight relative to those of their parents."

"Many parents of minority faiths are however convinced that a more integrated education is likely to better-equip their child for the future, so choose a mainstream school. More thought needs to be given to [encouraging] a higher proportion of parents to make such a choice."

Mr Wood has spoken in recent months on related topics at the European Commission at the invitation of First Vice-President Frans Timmermans, and at the Commission's first Annual Colloquium on Fundamental Rights on human rights-based approaches to fighting anti-Semitism and anti-Muslim hatred in Europe, to foster tolerance and respect in European societies. Speaking after the event, he commented, "With the latest atrocities in Paris this debate could not have been more relevant."

Shortly before the address at the European Parliament, Mr Wood spoke at the European Network on Religion and Belief's conference on "Manifesting Religion or Belief". He spoke of the importance of the UK's world-leading equality and human rights laws, and the attempt to undermine equality law in many European countries through ill-defined calls for greater exemptions and accommodations for religious beliefs.

Mr Wood stressed that secularism does not "deny anyone their right to manifest their religion within the law", but protects this freedom by "seeking to establish a level playing field" where nobody is "advantaged nor disadvantaged" because of their belief, or lack of it.

He warned that, while the NSS strongly upholds the universality of human rights, those values are clearly not universally held. "It could be argued that the Universal Declaration of Human Rights is no longer Universal, having been under attack by those – again from a religious standpoint – who increasingly dismiss it as a 'Western' construct. The Organisation for Islamic Co-operation has a long standing rival, the Cairo Declaration, in essence making the Universal Declaration subject to Sharia," he added.

Mr Wood argued for the need to recognise the alarming extent to which some religiously-motivated vested-interests seek to undermine equality law and human rights, citing the lack of protection from caste-based discrimination in the UK as just one example of this.

Interreligious dialogue: How can education contribute to tackle radicalism and fundamentalism in Europe?