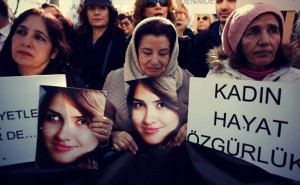 Proposals by the Turkish Ministry of Justice to treat sexual harassment and violence against women less severely have drawn widespread condemnation from campaigners.

The Iranian and Kurdish Women's Rights Organisation (IKWRO) is "deeply concerned" by the draft proposal and has warned that if passed the plans will allow perpetrators of crimes normally punishable by five years' imprisonment "to engage in negotiations with prosecutors to reduce their sentence to one year, postpone their sentence, do community service or pay money to avoid jail time."

They note that the proposal "covers a number of crimes that predominantly affect women and girls including molestation, sexual abuse, threats and sex with minors. Victims and survivors will not even be consulted in the negotiations" and they stress a background of hundreds of murders of women in Turkey this year alone.

The BBC reported earlier this year that there has been a "dramatic rise in violence against women in Turkey", linked by many to the ideology of the Islamist AKP.

President Erdogan and senior members of his party have made repeated statements about women's 'traditional' role in society. In November 2014 he denied that men and women should be on an "equal footing" and said it was "against nature".

In July the Turkish deputy prime minister told a female parliamentarian, "Madam be quiet! You as a woman, be quiet!" He had previously said that women should not laugh in public - in a speech on "moral corruption".

In their statement the IKWRO note that "since only January 2015, 285 women have been murdered. Perpetrators of violence against women and girls already face minimal charges and often walk free under the outrageous 'provocation' rule, which allows perpetrators to argue that they were provoked by their victims. If passed, the latest proposal would put yet more women and girls at risk of harm and would prevent justice.

"IKWRO urges Turkey, who notably were the first signatories of the Istanbul Convention, which aims to end violence against women and girls, to; reject the proposal, to end the 'provocation' rule and to take steps to safeguard women, including ensuring funding for women's rights organisations."

The warning from the IKWRO comes after the Justice and Development (AKP) party regained its majority after a snap election, the second poll this year. International observers have said that opposition parties were hampered by violence, arrests and a crackdown on press freedom. Within two days of the party's triumph "dozens" of Erdogan's political opponents had been arrested.