Call to overhaul RE teaching and rename the subject 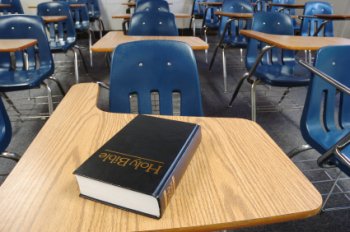 A review into Religious Education has called for fundamental reform of the subject, so that teaching reflects "the real religious landscape" of the UK – with content including a "broad range" of religious and non-religious views.

RE for Real, a report produced by the Religious Literacy Programme at Goldsmiths, University of London, has said there is a "policy muddle" around RE teaching and warned that "changes in the real religious landscape have far outpaced changes in education".

Academics have described the current approach to Religious Education as a "mid-20th century settlement for an early 21st century reality" that fails to acknowledge the nature of religion and belief in the modern United Kingdom.

Professor Adam Dinham, co-author of the report, said "We think non-believers and those with informal beliefs need to be treated more seriously as a growing part of the picture."

The report makes a raft of recommendations to overhaul what they say is the "piecemeal" amendment of policies dating back from 1944, with suggested changes to teaching, as well as a recommendation to rename the subject and include much broader content – including many more religious traditions and non-religious worldviews.

There is an "urgent need" to review the role of Standing Advisory Councils on Religious Education (SACREs) and for the appointment of "a national panel to develop the framework" of RE teaching, the report argues.

The academics raised concerns about the fact that Free Schools and academies are "not required to follow locally agreed syllabuses" resulting in a "diversity of approaches" to content and teaching, and the writers ask if RE is "up to the challenge" of meeting these significant "structural changes".

The National Framework which the report proposes should consider the purpose, content and structures of RE teaching and learning, and should also review the subject name of teaching about religion and belief. The Welsh government recently announced plants to rebrand RE as "religion, philosophy and ethics" as part of a package of reforms warmly welcomed by the National Secular Society.

The report is the result of interviews with 331 students, teachers, parents and employers and it found from the responses that many students are "uncomfortable" calling the subject RE.

Employers, teachers and students all stressed the importance of knowledge about "lived" religion to engage with a diverse society and with people from a multitude of religious and non-religious beliefs.

Ten employers interviewed for the study, which were "chosen to represent a range of public and private settings in a variety of sectors", said that RE should "give young people an understanding of what are acceptable manifestations of religion and belief within the work place and what are not."

"GCSE Religious Studies should remain as an optional subject," the report recommends, but there should a clear boundary "between academic study of the real religious landscape, and other religion and belief learning associated with SMSC (spiritual, moral, social and cultural development) outside of the GCSE."

NSS campaigns manager Stephen Evans commented: "Comprehensive reform of religious education is long overdue and we're pleased to see this report recognising that. We look forward to contributing to the ongoing debate over the way in which religion and belief is approached in schools and ensuring that any reforms reflect the needs of young people and society, rather than the priorities of religious leaders.

"In today's pluralistic society there is a need to move away from the concept of religious education entirely and recognise that the in-depth teaching of specific faiths is a parental responsibility, for those that want it, and not the role of state education.

"Young people would be much better served by religious education being replaced with a new and inclusive subject for all pupils covering the fascinating history of human ideas encompassing religious, non-religious and secular worldviews."