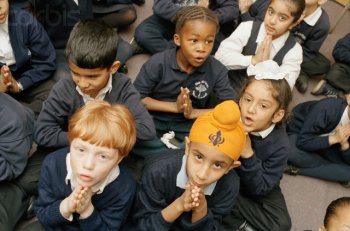 Senior academics have warned of "significant concerns" about the imposition of collective worship in non-religious schools – arguing that it may violate the right to freedom of religion and belief.

In a report on religious observance in the education system, the Arts and Humanities Research Council (AHRC) have called on all educational authorities to 'clarify' pupils' right "to withdraw from acts of collective worship/religious observance" and to ensure that "all schools" provide the option to withdraw for all of their students.

The report calls on each of the four countries in the UK to establish a working group to consider whether a rationale exists for collective worship in schools. If no rationale can be found for the practice, the AHRC say, "the current duties should be abolished."

The report has been welcomed by the National Secular Society, which has for many years campaigned for the requirement on schools to provide worship to be abolished, and for enhanced rights for older students to be able to withdraw themselves.

Keith Porteous Wood, NSS executive director, said: "The requirement for schools to hold worship is hopelessly outdated and completely inappropriate where most young people are not religious and those who are come from a multiplicity of faiths.

"Laws that mandate worship are an obvious affront to children's and young people's religious freedom, usurp parental rights and go well beyond the legitimate function of the state.

"The right to withdraw from school worship is neither a practical nor an acceptable compromise. It inconveniences schools and leaves pupils ostracised, so parents wishing to withdraw their children are left in an impossible position.

"Many schools flout the law because teachers know how inappropriate and unworkable it is, so in those cases abolition would simply formalise the arrangement that already exists, and it would give this common-sense approach a legal basis. A law that is unenforceable is a bad law, and in this case a bad example to pupils."

The Research Council has said that "standardised guidelines" should be issued on the right to withdraw from collective worship under current law, and for the specific procedures used to accommodate those wanting to exercise their right to withdraw.

It also recommended that schools should be proactive in making both parents and pupils "aware of the right to withdraw from acts of collective worship" and have "clear procedures" to make this right accessible.

There are particular concerns in Scotland, where "no independent right of withdrawal is available to pupils." In June hundreds of pupils at a Scottish High School signed a petition against compulsory Christian assemblies, blasting the practice as "outdated" and calling for "no religious interference" in schools. The National Secular Society is regularly contacted by parents concerned about the imposition of worship and the practical difficulties in withdrawing children from religious activities.

The AHRC has recommended that the term "Religious Observance" be replaced in Scotland with "Time for Reflection", to be "more inclusive" of the non-religious and of non-Christians.

Where pupils are not given a legal right to withdraw from collective worship in schools, the Research Council recommend that "there should be clear procedures for assessing the maturity of the pupil" to establish their competency to withdraw themselves without parental permission.

The body also set out its concerns about schools' use of external speakers in collective worship, and said that "Schools should have a clear set of guidelines on the use of external speakers, and should explicitly notify parents in advance of any such speakers coming to the school to participate in acts of collective worship and religious observance."

This echoes recommendations made in the National Secular Society's Evangelism in Schools report which highlighted the problem of schools being targeted by evangelical groups as part of their missionary work.

The AHRC report restricts the majority of its recommendations to schools without a religious character, saying "separate and distinct consideration" should be given to faith schools.

Earlier this year a report co-authored by former education secretary Charles Clarke also recommended the abolition of the legal obligation on schools to provide a daily act of collective worship. This followed an earlier call in 2014 from the National Governors' Association for the religious element of schools assemblies to be scrapped.

You can read the Arts and Humanities Research Council report in full here (PDF).