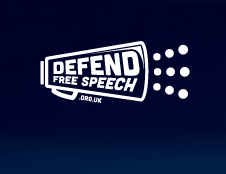 The National Secular Society and the Christian Institute have joined together to launch a new campaign, Defend Free Speech, in opposition to proposed 'Extremism Disruption Orders'.

While much of the Government's anti-extremism agenda is supported by the NSS, the Society and the Christian Institute share serious concerns that vaguely defined 'Extremism Disruption Orders' (EDOs) will limit free speech and be used to target a whole range of non-violent individuals who hold orthodox religious views or other beliefs which may fall under a broad definition of "extremism".

National Secular Society campaigns manager, Stephen Evans, commented: "It's fair to say that the Christian Institute and the National Secular Society don't see eye-to-eye on many issues. But we both agree on the need to defend freedom of expression, and we share concerns that Extremism Disruption Orders will have a chilling effect on free speech.

"A vague definition of extremism could mean these measures catch all manner of individuals and groups, not just the Islamist extremists the Government hopes to tackle. There is already a sufficient range of powers and existing laws that police can use to combat extremism and incitement to hatred or violence. Any further legislation restricting free expression runs the serious risk of criminalising ordinary people for simply standing up for what they believe in."

Campaigners had hoped for more details about the plans in Home Secretary Theresa May's address to the Conservative Party conference, but her speech in Manchester made no mention of the proposed EDOs.

Mr Evans added: "It may be that the Government is hesitating about whether to push forward with the plans in the face of widespread opposition – something we would obviously welcome."

Chancellor George Osborne has said that Extremism Disruption Orders will go "beyond terrorism" and "eliminate extremism in all its forms".

Simon Calvert, Deputy Director for Public Affairs at the Christian Institute, argued that the Government's description of extremism "seems to include many minority, traditional or unpopular views.

"These will likely include many campaign groups, mainstream religious leaders, and outspoken atheists.

"The Government has decided that to tackle the scourge of extremism it will introduce a catch-all offence, and one which assumes guilt not innocence."

In addition to the free expression campaign mounted by the Christian Institute and the National Secular Society, the plans have been heavily criticised in the Times, the Daily Mail, and the Telegraph.