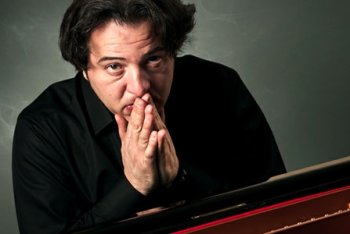 Turkey's most famous modern pianist, Fazıl Say has been awarded the 2015 International Secularism Prize (Prix de la Laïcité) by the France Committee of Secularism, two years after being convicted of blasphemy for a series of tweets.

Mr Say used his acceptance speech to celebrate the role of secularism in the foundation on the Turkish republic and its justice system. Mr Say told guests, including the French Prime Minister, that secularism "has given freedom to a range of philosophical approaches ensuring equal rights to its people dispersed under different beliefs and ethnic origins, both to believers and non-believers".

He also warned of the rising sectarianism and the perception that "secularism is about to disappear" in "a tragic change".

Mr Say has been a vocal proponent of the role of the arts in challenging establishment power and a prominent critic of the AK party led by Turkey's then Prime Minister (now President) Recep Tayyip Erdogan. His 2012/13 trial for 'denigrating Islam' and 'inciting hatred' was widely viewed as politically motivated. His offending tweets had included a verse from a poem by 11th-century Persian poet Omar Khayyám which criticises pious hypocrisy – seen as a comment on Erdogan's use of religious power to bolster the increasingly authoritarian regime.

After his speech Mr Say dedicated a performance of his Kara Toprak (Black Earth) piece to victims of terrorism including the Charlie Hebdo attack and the suicide bomb attack on an Istanbul peace parade last month.

Commenting on the award, Turkish MP and NSS honorary associate Şafak Pavey, said: "Fazil Say has resisted all threats and defamation of his character to tell the value of secularism and its vital importance to Turkey.

"This esteemed award is a most-deserved recognition of his work, and gives strength to secularists' struggle of survival.

"Unfortunately, ours is the last secularist struggle in the Middle East. Secularism has been all but defeated in the region and the odds are not in our favour in Turkey.

"Fazil Say is a most precious symbol of our deep cultural conflict and struggle to exist. The outcome of this conflict will affect the entire world, to a far larger degree than anyone would like to think."

Şafak Pavey was awarded the National Secular Society's Secularist of the Year prize in 2014.