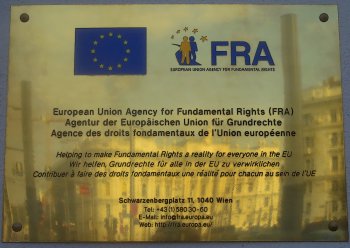 The National Secular Society has spoken out at a meeting of the EU Agency for Fundamental Rights (FRA) on religious intolerance to call for integrated schools that promote citizenship and human rights.

The European Commission's first annual colloquium on fundamental rights was held to discuss ways to foster tolerance and respect and fight antisemitism and anti-Muslim hatred in Europe.

A Eurobarometer poll published ahead of the event revealed that 50% of Europeans believe religious discrimination is widespread.

The FRA found that (56%) think there will be no change in relations between people of other faiths and cultures, but around a quarter (23%) expect relations to worsen and only 14% think they will get better.

In interventions at the two-day colloquium in Brussels, National Secular Society executive director Keith Porteous Wood highlighted the importance of integrated education to combat religious hatred and sectarianism, and called on schools to be required to actively promote shared citizenship and human rights.

Mr Wood highlighted the research of Irene Bruegel which found that the most effective way to achieve real integration is for children of all religious backgrounds to be educated together from primary level.

Though the Society is deeply troubled by the rise in religiously-motivated hate crimes and by sectarian attacks, Mr Wood warned the colloquium against the introduction of "knee jerk legislation" to combat antisemitism and anti-Muslim hatred – pointing out that existing hate speech legislation in the UK already prohibited incitement to racial and religious hatred.

"Secularism has a key role to play in ensuring people of all faiths and none can live together peacefully and harmoniously. Particularly at a time of significant demographic change, it is essential that European states robustly defend and promote key secular principles that enable us to live and let live – but within clear limits. The alternative is a future of sectarian conflict and competitive religious grievance and demands", he said.

Mr Evans also questioned the European Commission's use of the contentious term 'Islamophobia' in combatting hatred.

"Anti-Muslim bigotry will not and cannot be tackled effectively whilst the accusation of 'Islamophobia' is used to stymie criticism of Islam. People must be free to raise concerns about manifestations of Islam they consider hostile to Europe's secular liberal values. Any attempt to curtail the fundamental right of free speech in the hope of encouraging greater cohesion will be wholly counterproductive.

"Education is probably the best chance we have to stimulate future social harmony and cohesion, but that chance is being wasted by pursuing policies that promote faith-based and fragmented schooling. Rather than encouraging self-segregation we need to encourage an inclusive and secular education system which promotes universal, rather than religion-specific values and allows young people the autonomy to decide their religious outlook without coercion", he added.

The EU Fundamental Rights Agency survey on discrimination and hate crime against Jews shows rising antisemitism in Europe; 73% of respondents felt that antisemitism online has become worse over the last five years.

The FRA has said that antisemitism "in France, Denmark and elsewhere in the EU are part of a climate of intolerance that we must fight with all the means at our disposal."

"The EU and its Member States need to take immediate and decisive action to combat extremist, xenophobic and antisemitic discourse and crimes."

European Commission Vice President Frans Timmermans said "it's a vital question for the future of Europe that our Jewish community feels at ease and completely at home."

50% of Europeans believe discrimination based on religion or beliefs is widespread (up from 39% in 2012).

Muslims suffer from the lowest levels of social acceptance of all religious groups, with only 61% of respondents stating that they would be fully comfortable with a colleague at work being Muslim, and only 43% being fully comfortable if their adult children had a relationship with a Muslim person.

Only six EU Member States in the survey show an improvement in perceptions of relations between people from different cultural or religious backgrounds or nationalities between 2013 and 2014, and all shifts towards more positive opinions are small.