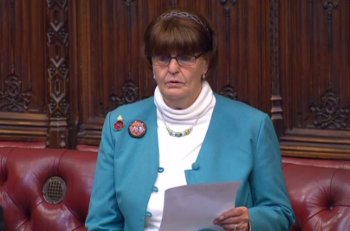 The Arbitration and Mediation Services (Equality) Bill, proposed by Baroness Cox, has passed its second reading in the House of Lords and was met with support from peers across the political spectrum.

The Bill would make it illegal for any arbitration tribunal to "do anything that constitutes discrimination, harassment or victimisation on grounds of sex" and several honorary associates of the NSS offered their support for the Bill.

It would specifically prohibit those providing arbitration services from "treating the evidence of a man as worth more than the evidence of a woman" and from "proceeding on the assumption that a woman has fewer property rights than a man".

Introducing her Bill, Baroness Cox said it was "strongly supported by many organisations concerned with the suffering of vulnerable women, including the Muslim Women's Advisory Council, Karma Nirvana, Passion for Freedom as well as by the National Secular Society."

She quoted one Muslim woman who told her, "I feel betrayed by Britain. I came here to get away from this and the situation is worse here than in the country I escaped from".

Baroness Flather, an honorary associate of the National Secular Society, said there should be no parallel legal system in the UK, and that while it was a "particular issue for women", it was not a "women's issue", but one of national importance for all.

She said that gender discrimination was inbuilt to sharia, and that people who come to live in the UK have a "duty" to integrate – she warned that there was "no desire" to integrate among many Muslim communities, and warned that a "state within a state" would arise unless greater efforts were made. She said that she did not want the "culture of an Islamic country" practised in the UK.

During the debate Baroness Donaghy said, "We cannot afford to go backwards" to a situation where women were not equal before the law. She added said that arbitration and mediation were being confused in sharia 'courts'.

Baroness Eaton said there was increasing evidence that sharia law was being used as an alternative legal process. "Many women not born here, lacking language and education" are in a vulnerable position and are "often unaware" of their rights under UK law, she added, warning of tribunals pretending to have legal power. Baroness Eaton welcomed that the Bill would create an offence of pretending to be a court.

The Baroness said that "many women and girls in the UK are suffering systematic, religiously-sanctioned gender discrimination."

The Bill addresses the precarious position of women in unrecognised Islamic marriages, and would require public bodies to inform individuals of the need to "obtain an officially recognised marriage in order to have legal protection" and notify people "that a polygamous household may be without legal protection and a polygamous household may be unlawful."

Lord Sheikh said that "Muslims were clear" that UK law prevailed, but defended the use of sharia councils. He said that there should be no "coercion" about the use of sharia councils, but other peers pointed out that women come under immense pressure from their families and communities to go to sharia 'courts' instead of availing themselves of their rights under UK law. He also claimed the Bill aimed to "demonise Muslims" – a point strongly rebutted by Lord Carlile who described the Bill an attempt to "demonise discrimination".

Lord Sheikh was also challenged by Baroness Flather over whether gender discrimination was inherent within sharia law. Sheikh replied: "it depends what [you mean] by discrimination".

Baroness Massey, also an honorary associate of the National Secular Society, said that the "unequal division" of an estate between male and female children would not be enforceable under UK law, and added her voice to warnings from other peers about women being left unaware of their rights.

She said that girls needed to be "better educated" to avoid religious gender discrimination later in life.

Lord Kalms said that "religious fundamentalism is a system that will always be in conflict with Western liberal democracy" and that it is a system of "non-negotiable, theocratic edicts which run completely against our concepts of human rights and equality."

"Intolerant religions always make unacceptable encroachments when they are in a minority", and cause "catastrophes where they dominate". Secular law must "always stand supreme," he said, praising the Bill.

"Our laws are supreme over every religious 'court'", he continued, "one law for all applies, uncompromisingly; British law. If any woman in front of a sharia 'court' is not fully aware of her rights under the British law, any judgements must have no binding basis. All involved should be charged with what amounts to perversion of the course of justice."

Lord Faulks, speaking for the Government, reiterated the Government's intention to conduct an independent review of Sharia Courts. The Minister of State for Justice said that the Government did not know how many sharia councils were in operation and he said it took concerns "very seriously" but questioned whether the Bill was the right way to deal with the problems that exist.

Baroness Cox said she had "sincerely hoped" the Government would have been more sympathetic to her Bill and said that to the many organisations representing Muslim women and human rights groups these "modest" proposals would have been welcome.