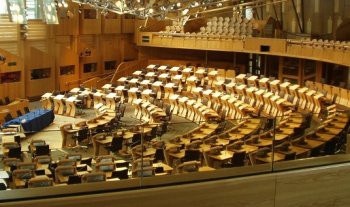 Plans to set up a "religious pressure group" featuring creationist MSPs in the Scottish Parliament have come under fire from non-believers and minority faith groups.

It was reported in the Herald that the "new religious pressure group" was being backed by Aid to the Church in Need, which provides "active charity to heal the wounds inflicted by atheism".

The organisation will reportedly provide administrative support to the parliamentary group.

The Cross-Party Group on Religious Freedom is ostensibly planned to promote religious freedom, but its backers have caused serious concern from a range of critics, as they include three MSPs who supported a parliamentary motion in January which asserted that science could not prove or disprove creationism, and that therefore "children in Scotland's schools should be aware of all of these different belief systems", including creationist thought.

NSS Vive-President and spokesperson for Scotland Alistair McBay commented: "Scotland and David Hume were at the forefront of an Enlightenment that saw a retreat from superstition and non-evidenced belief.

"It is worrying to see some of Scotland's politicians embracing religious fundamentalism and once again fostering division, intolerance and scientific ignorance. Hume must be spinning in his grave."

The proposed grouping has come under fire from Green MSP Patrick Harvie, who said that religious freedom can "only be meaningful when it applies equally to all religions, as well as to the very large proportion of society who are not religious but who often suffer discrimination for that reason.

The National Secular Society welcomed his comments and he added that "religious freedom must include freedom from religion, not only freedom of religion."

NSS campaigns manager Stephen Evans said that the NSS was "particularly concerned by the nature of the organisations backing the Cross-Party Group.

"The idea that non-religious people will be fully welcome in such a body, given its primary supporters, seems suspect to say the least.

"The non-religious face global persecution; any serious discussion of religious freedom must consider that fact and we doubt that this group would be capable of doing so objectively."