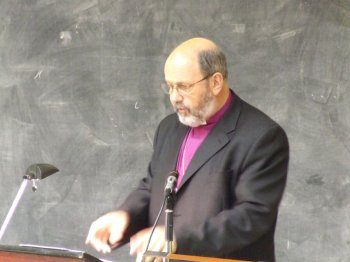 Dr Tom Wright, the former Anglican bishop of Durham, has called for "cruciform theocracy" at an event held at St Paul's Cathedral.

Wright said that there should be no separation between religion and politics, and that Jesus "came to institute God's rule on earth, theocracy."

He said that "To hear the call of Jesus right now [is] to be part of [a] kingdom project."

"The whole meaning of God's kingdom is about the one true God calling time on the world's wicked empires and setting up a radically different empire instead."

The former bishop rejected the view of some secularist Christians that the New Testament acknowledges a separation between church and state and went on, "When Jesus talks of [the] Kingdom of God, he really did mean that this was the time for God to become King and reign in a way that not only challenges Caesar's kingdom but challenges Caesar's type of kingdom."

"When you put it in context, it is anything but a mandate for church/state split," he argued.

In an apparent reference to the refugee and migration crisis, he said: "The problem is that the West has bought so deeply into the narrative of the Enlightenment and then can't understand what has gone wrong when the tragedies of this world literally wash up on our shores."

National Secular Society campaigns manager, Stephen Evans, said: "I'm sure most Christians in the UK would join us in dismissing these bizarre comments. Theocracy and the imposition of religious belief through coercion is the direct cause of many conflicts in the world today; to say nothing of the immense human rights abuses that theocracies perpetuate.

"The former bishop's comments might be laughable in a British context – because nobody will take them seriously – but in other parts of the world defending theocracy means defending blasphemy laws, the death and imprisonment of apostates, and a whole catalogue of abuses.

"Secularists are serious about defending religious freedom and freedom from religion; Bishop Wright's worldview threatens both."

Bishop Wright has made many controversial comments in the past. In 2008 he said that "secular utopianism" is based on a belief that "we have the right to kill unborn children and surplus old people, and to play games with the humanity of those in between."

Dr Tom Wright is currently serving as Professor of New Testament and Early Christian Studies at The University of St Andrews.