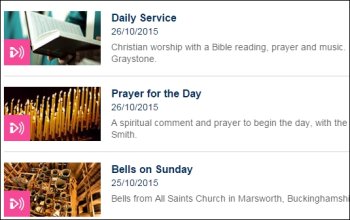 The BBC's latest annual report indicates a general reduction in the hours the Corporation devotes to religious broadcasting. The only increase was on BBC1 which devoted 86 hours to religious programmes in the 2014/15 period while in the previous year it was 80 hours.

BBC2 reduced its religious output from 69 hours to 50 hours while BBC4 had 21 hours of religion – the same as last year.

The amount of religious output on BBC Radio reduced from 611 hours last year to 592 hours this year.

The BBC Trust says it is clear that the BBC must do all it can "to stay relevant to all audiences across the UK" and that here is more to do to address audience perceptions as to whether the BBC "fairly represents all the UK's nations and regions, religions and ethnicities."

Terry Sanderson, president of the National Secular Society, commented: "The BBC seems to be gradually getting the message that very few of its licence-payers are interested in directly religious programmes. We accept that religion cannot be ignored in the modern world – its malign influence is apparent in almost every news bulletin – but there is little evidence that the directly proselytising output is being reduced. We still have a Daily Service and Prayer for the Day as well as discriminatory slots like Thought for the Day and Pause for Thought, which are reserved entirely for religious contributors."

Mr Sanderson said that in an increasingly diverse society it was unrealistic to devote so much time to Christianity. "The BBC shouldn't allow its publicly-funded airways to be used to evangelise for a particular religion, which is basically what these daily church services do."