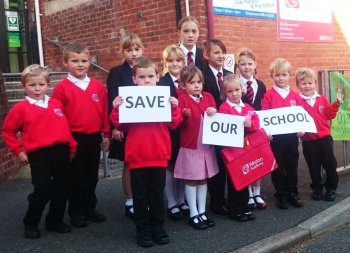 Parents on the Isle of Wight face being forced to accept places at religious schools for their children after plans were announced to close the only non-denominational primary school in the area.

The National Secular Society has joined local parents in calling on Education Secretary Nicky Morgan to reverse a decision to close Weston Primary Academy, arguing that denying parents the choice of a secular school undermines pupils' religious freedom and parental rights to have their philosophical beliefs respected during their children's education.

Academies Enterprise Trust (AET) has written to parents and carers with children at Weston Primary in West Wight to inform them "with great sadness" that decreasing pupil numbers means the school has a small annual budget making it difficult to provide a quality education. It says that it plans to close the school at the end of the Autumn term.

In 2012 the school was saved from closure by opting out of local authority control and gaining academy status. The school has since been put into special measures by Ofsted.

The closure will leave parents with no option other than to home-school or send their children to one of two Church of England schools or a Catholic school. The nearest non-religiously designated school – 12 miles away – is already at full capacity.

AET's decision to close the school has been agreed in principle by Secretary of State for education, Nicky Morgan.

Stephen Evans, National Secular Society campaigns manager, said: "Closing down a non-religiously designated school and leaving parents with no option other than a faith school is completely unacceptable. To do so without consulting key stakeholders shows complete contempt for the affected families and reveals a disturbing democratic deficit in the academies system.

"Faith schools are so often justified using the mantra of choice, but here, like in so many other areas, we see non-Christian parents and pupils being denied choice and instead being forced into faith-based schools.

"Closing Weston Academy without guaranteeing parents alternative secular provision shows a worrying disregard for parental rights and young people's religious freedom. We very much hope the Secretary of State will rethink her decision to allow this school to close."

George Metcalf, a parent of two children at Weston Academy, told the NSS: "The lack of public accountability in the process is flabbergasting. I am stunned by lack of guidance for the closure of Academies. This is the only non-denominational school in the area and if this school closes, our only other options are faith schools. Being a family of no fixed faith, and believing our children should decide themselves their own spiritual or belief path, we will have no option other than take on the task of home education. It seems to me that if you have a recognised faith you can't be discriminated against, but if you don't identify with a particular religion there is little support."

"Our view about non-denominational schools is also shared by a large amount of parents who are religious, but want their children to decide", he added.

Hollie Griffiths, a parent of two children at Weston Academy said: "I believe the children would be negatively impacted by moving to a faith school. If I ask them to be excluded from religious activities, it would isolate them and that's not an acceptable solution for us."

Danny Hadland, another parent, said: "We are gutted that the only non-faith school on this side of the island is closing. We feel left with no choice in the matter of sending our child to a faith school. This is a great school: the staff and teachers are so lovely. Our daughter has speech therapy and is very shy; since she has been going to Weston Academy she has started to come out of her shell and her speech is improving. Now the school is closing. What is this going to do to her learning? We do not want her to be forced to attend a faith school."

Although there is no consultation parents and other interested parties have until 7 October to submit their views on the intended closure. Views can be submitted to: academy.questions@education.gsi.gov.uk.

Parents have also launched a petition calling on the Secretary of State to keep Weston Primary open.