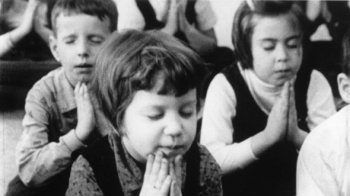 A Sixth Form student has started a campaign against collective worship in Northern Ireland, from which pupils currently have no right to withdraw without parental consent.

Scott Moore, a 17 year-old student, has started the petition calling on Northern Ireland Minister for Education John O'Dowd to make prayers in assemblies optional for schools, after Moore's own experience of being compelled to attend prayers which he did not believe in during the school day.

Under current law, students in Northern Ireland have no right to withdraw themselves from collective worship in schools and can only do so with parental permission. Without this, they are compelled to attend prayers.

Moore argues in his petition that, "collective worship violates young people's right to freedom of religion. This is because it stops them from being able to decide in a balanced manner what their views actually are."

He is only campaigning for a modest, incremental reform however, and says that although he believes "collective worship should face complete abolition", the petition only seeks to "change the law so schools can choose whether their assemblies have prayer".

Research from Queen's University Belfast published in October 2010 criticised the "poorly executed" opt-out clause. It also revealed that even among people who believed the right to opt-out should remain with parents, "it was suggested that students should be more formally involved in the decision-making process as well as in discussions around the kind of alternative provision that should be offered during the opting-out period."

Moore is calling on the government of Northern Ireland to reform the current law, citing the injustice of students potentially forced to attend worship because of their parents' "own hardline Christian views".

He became an atheist at the age of 12 and began asking to be excluded from religious events, but this request was not granted because he needed parental permission.

"As Christians and people who were [averse] to kicking up a fuss, my parents refused," he says.

"Right now, I'm in sixth form. I won't have to do RE. But my parents could put me back into collective worship and the Easter/Carol services. I trust that they won't, but it's not right that they should hold that power," he added.

Encouraging people to sign his petition, he wrote, "It's not just about avoiding an assembly. It's about having your identity recognised. It's about [having] your sense of being an independent person recognised and respected. It's about recognition for having your own views, and not someone else's."

In England and Wales, Sixth Form pupils gained the right to self-withdraw following extensive campaigning by the NSS and a recommendation by the Joint Committee on Human Rights.