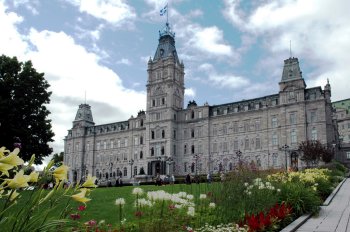 The Quebec National Assembly is considering a bill that would be used to criminalise criticism of Islam under the aegis of banning "hate speech".

Bill 59, introduced in the National Assembly by Minister of Justice Stéphanie Vallée, is ostensibly designed to crackdown on hate speech, but the head of the Quebec Human Rights Commission (QHRC), Jacques Frémont, has been quoted saying that he would use the new powers to target "people who would write against … the Islamic religion … on a website or on a Facebook page."

The law would allow the QHRC to "apply for a court order requiring [alleged hate speech] to cease" and would further impose a fine up to $10,000 if "a person has engaged in or disseminated such speech". The exact monetary value of the fine would be determined by the Human Rights Tribunal.

The act states that the purpose of the various prohibitions is not to limit speech which "legitimately" informs the public but it casts an extraordinarily broad net, stating not only that hate speech will be punished by law but that "a person [who] has acted in such a manner as to cause such speech to be engaged in" will also face penalties.

Under the proposed law, the QHRC would keep a list – available online – of all those who have been engaged in 'hate speech', as determined by the Tribunal. This measure has been compared with the registration of sex offenders, to which only police have access.

In another particularly troubling detail, the Commission would not need to wait for a complainant to come forward and it could initiate an investigation itself.

An NSS spokesperson commented: "It is very worrying to see a democratic legislature using tricks taken straight from the Organisation of Islamic Cooperation's (OIC) playbook to effectively ban blasphemy and criticism of religion.

"It is an Orwellian nightmare that the proposed law in Quebec would leave a human rights body tasked with determining the monetary fine for criticising religion, and that the QHRC is seemingly boasting about its potential role in using this legislation as a de facto blasphemy law.

"Nor is this a problem limited to Quebec. In Northern Ireland a Christian preacher, James McConnell, is currently being prosecuted for what authorities call a 'grossly offensive' sermon in which he criticised Islam. We haven't seen any evidence of incitement to violence in his remarks.

"None of these events are isolated. They all take place in the broader context of a relentless assault on free speech being pursued though any number of means. Aside from violence and terror, this agenda is being advanced at the UN by the OIC, and in legislatures such as this case in Quebec, or in the UAE, which recently made it illegal to 'offend God'.

"The OIC desperately wants to see criticism of Islam criminalised globally, and too many 'useful idiots' in the West buy into their perversion of 'human rights' language to achieve this sinister aim. In August a senior Saudi official said that free expression was an 'abuse of religious rights'. The West must not be lazy in resisting this; or worse, compliant, as this piece of legislation is. Religions shouldn't have rights, and religious believers have no 'right' to remain unoffended by satire, criticism or ridicule."