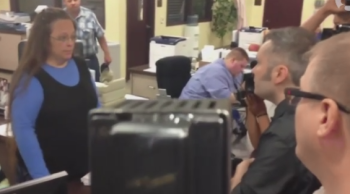 A county clerk in Kentucky has persisted in denying same-sex couples marriage licenses, in open defiance of a federal court order.

Kim Davis, the clerk in Rowan County, said that she was acting with "God's authority". On Monday 31 August a one-line court ruling denied Davis' application for a stay, however she continued to fail to grant licenses.

Davis was then confronted by a gay couple about her continuing refusal to issue marriage licenses and when asked why she was not complying with the order, said "because I'm not".

She was then asked under "whose authority" she was refusing to issue marriage licenses when Davis replied that she was acting "under God's authority".

The clerk is now in direct defiance of the US Supreme Court and has said that any "validation" of same-sex marriage on her part would "forever echo in her conscience".

US District Judge David Bunning said that Davis has violated the First Amendment's wall of separation between church and state by "openly adopting a policy that promotes her own religious convictions at the expense of others."

One of Davis' supporters, Pastor Randy Smith, said that God has "higher authority than the Supreme Court." He said that same-sex marriage was an "abomination".

Davis has been described by her lawyer as a Christian with "sincerely held religious belief that marriage is a union between one man and one woman, only." However she has been called an "unlikely" candidate to wage a culture war, after it emerged that she has been married four times and given birth to children outside of marriage.