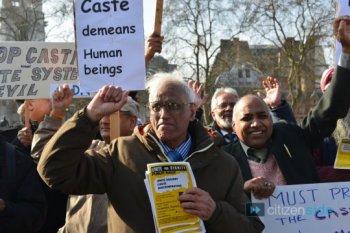 A victim's charity has slammed Government inaction on caste discrimination, following an Employment Tribunal awarding nearly £200,000 to a woman who worked for four and a half years in horrendous conditions.

Despite the ET ruling in favour of a woman who claimed to be a victim of caste discrimination, it is feared that many will remain without legal protection from discrimination because the Government is refusing to enact legislation to clarify that caste is an aspect of the protected characteristic of 'race'.

The victim, known as Ms Tirkey, was kept in "domestic servitude" by a couple who employed her for over four years on 11p an hour, forcing her to sleep on the floor after working long days. They also prohibited her from contacting her family and from bringing her Bible with her from India, telling her that she would have "no time to read whilst she was working".

The claimant was of the "lowest class" in the "caste pyramid" and her family "has always carried out domestic work or one kind or another", according to the ruling.

When she arrived in the UK Ms Tirkey's employers set up a bank account in her name, which they retained control of, and she was made to work for 18 hours per day, for seven days a week.

The Employment Tribunal ruled decisively in her favour for "indirect religious discrimination" and "direct race discrimination". She was awarded £183,773 for underpayment of wages, with a further hearing to determine punitive damages for the discrimination.

Ms Tirkey was keen for others to avoid her fate: "I want the public to know what happened to me as it must not happen to anyone else. The stress and anxiety that this sort of thing creates for a person can destroy them."

The Anti Trafficking and Labour Exploitation Unit, a charity that provides legal representation to victims of labour exploitation and which aided Ms Tirkey in her case, has described the Government's position on caste discrimination as "untenable".

Chris Milsom, Ms Tirkey's barrister, said, "Those who have closely followed the legislative history of the Equality Act will recall that the Government's original rationale for refusing explicit prohibition of caste-based discrimination was that there was no evidence of it taking place in the UK. The damning findings of the Employment Tribunal render that stance untenable. Where such discrimination exists its victims must be protected".

The report on caste prepared for the Government almost five years ago "identified evidence suggesting caste discrimination and harassment" in relation to "work … provision of services and education."

The National Secular Society has called once again for the Government to legislate immediately to explicitly prohibit caste discrimination after "years of prevarication and procrastination".

Keith Porteous Wood, the executive director of the National Secular Society, commented on the ruling: "While the individual ruling is clearly good news for the claimant, it does not set a precedent that can be used in future cases. The ruling completely undermines the Government's disingenuous claim that this case makes legislation unnecessary.

"The Government's refusal to act is in defiance of Parliament's twice expressed wish, the UN's recommendation, and our treaty obligation to enact law explicitly prohibiting caste discrimination.

"The Government must recognise the extent of the problem and offer an accessible and effective legal remedy. This case shows that the case law they advocate provides neither.

"As this example demonstrates, satisfactory outcomes to case law are very limited. The process is beyond the financial reach of most, especially those of low caste, hence the necessity for the assistance of a charity to pursue this case. That is why the law must be changed to provide access to justice for all victims of caste discrimination, but the Government has set its face against this, for less than noble reasons.

"I am alarmed at the growing visibility and strength of those opposing such legislation, who will almost inevitably include high caste Hindus, and the carelessness with facts with which they pursue their opposition.

"Sadly, the protection demonstrably needed by those of low caste in the UK, as seen in this case, seems further away than ever given the Government's obdurate refusal for over five years to acknowledge the strength of the case for legislation."

Anthony Lester QC, a human rights lawyer has also described the case as being "of no value as a precedent" and said the government "should not be allowed to use it as an excuse for defying the will of parliament" and refusing to outlaw caste discrimination.

The National Secular Society and Lord Eric Avebury recently wrote to Prime Minister David Cameron protesting the Government's failure to outlaw caste discrimination and calling on him to act urgently to deal with the problem. The reply completely failed to answer the charges.

In February 2015 a debate in the House of Lords saw honorary associates of the National Secular Society strongly criticise the Government's inaction and its failure to implement specific legislation.

In late 2010 research suggested that perhaps in excess of 200,000 people in the UK were victims of caste-based discrimination.