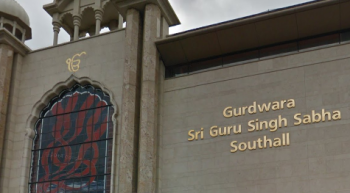 Sikh Federation UK, the "leading" Sikh lobbying organisation, has refused to condemn the actions of a group of men who disrupted an interfaith wedding.

The Independent reports that a group of "up to 22 people" arrived at a Sikh temple in Southall on Friday 9 August, while "final preparations were underway" for the wedding of a Sikh woman and a "white, non-Sikh" man. The couple were forced to cancel their wedding day after the gang stormed into the temple.

Sohan Singh Sumra, vice-president of the Sri Guru Singh Sabha Gurdwara, told the Independent that the men "were all thugs" who objected to the ceremony simply because it was a "mixed marriage."

Mr Sumra said the group wanted to "intimidate" the bride and groom, and that police had to be called.

The journalist Sunny Hundal later confronted the Sikh Federation UK on Twitter about the incident, and asked them to condemn the actions of the gang but they refused, stating only that what happened at the temple in Southall "should be avoided".

The Sikh Federation said those who "understand" and "respect" the Anand Karaj will "realise it is more important" than the couples' "'big day'".

Mr Hundal warned that "gang-mentality puritanism" would lead to a "Sikh version of the Taliban". He also posted comments made against him by "fundamentalist Sikhs" who objected to his criticism of the Sikh Federation.

He added that instances of "hypocritical and fanatical thugs" arriving to disrupt interfaith weddings were becoming more common.

When asked by Sunny Hundal if they "support or condemn these thugs going around disrupting inter-faith marriages at Gurdwaras?" the Sikh Federation replied obliquely that they "stand by and defend" the tenets of the "Sikh faith".

The Sikh Federation states that it believes "temporal and spiritual goals are indivisible".

A letter published in the Times on 21 July warned of a "recently placed" ban on Sikh temples "solemnising marriages between Sikh and non-Sikh". However, advice from 2007 stipulated that the Anand Karaj should only be between two Sikhs.

Guidelines published by the Sikh Council UK in October 2014 state that "Any person wishing to exercise the choice to marry in a Gurdwara Sahib through the Anand Karaj ceremony must sign a declaration" that "He or she is a Sikh, believes in the tenets of the Sikh faith and owes no allegiance to another faith."

They must also pledge to "endeavour to bring up any children from his or her marriage as Sikhs".

NSS president Terry Sanderson commented: "This kind of fundamentalism is very dangerous. It may amount only to bullying at the moment, but as fanaticism increases it can escalate to frightening levels of violence.

"The Government should stamp down on this now before it gets out of control. They must learn from the experience with Islamism that ignoring the problem on grounds of political correctness will only allow it to fester and get worse."