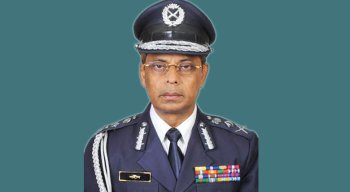 A petition has been started calling for the head of Bangladesh's police to resign after he told secularists not to 'cross the line' by insulting religious feelings, days after Niloy Neel was killed.

A.K.M. Shahidul Hoque, the Inspector General of Police in Bangladesh, said that secularists and atheists would be "punished by the law" for "hurting someone's religious sentiment" two days after Niloy Neel, the secular blogger, was murdered by Islamists.

Hoque's remarks sparked uproar when he first made them, and now the Bangladesh Liberal Forum has started a petition calling on the national police chief to resign.

The Council of Ex-Muslims of Britain urged supporters to sign the petition, blasting Hoque's "abhorrent statement" that threatened anyone "who criticizes religion in the spirit of free speech" with 14 years in jail.

According to the petition "Mr. Hoque also encouraged people to notify police and file a case if they come across any writings that hurt religious feelings."

The Bangladesh Liberal Forum write that his response was "entirely inappropriate" victim-blaming, and that it sent a "disastrous message to both writers and Islamist extremists in Bangladesh."

They added: "The nonchalant attitude displayed by Bangladesh Police in the face of the continuing series of acts of violence against freethinkers directly contributes to the rise of religious extremism in Bangladesh."

Meanwhile police investigating the killings of secular bloggers in Bangladesh have announced that one of three people arrested for the murders of Avijit Roy, killed in February 2015, and Ananta Bijoy Das, "hacked to death" in May 2015, include a UK citizen.

Touhidur Rahman, a British-Bangladeshi, reportedly planned the murders. He has been described as the "mastermind" behind the brutal killings, and also a financier of a banned Islamist organisation.

Maajid Nawaz of counter-extremism think tank Quilliam, also an honorary associate of the National Secular Society, said it was "totally unsurprising" that a British Muslim was "suspected to be behind machete murders of secular free thinkers in Bangladesh."

Mr Nawaz recently warned that "theocratic aspirations" have become a "normalised part of life among too many British Muslims."

The National Secular Society has reiterated its call for the UK Government to recognise global discrimination against atheists, humanists and secularists.

See also: "You can never kill ideas: an anonymous blogger on the deaths of secularists in Bangladesh."