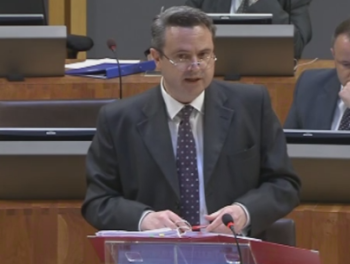 The National Secular Society has written to Huw Lewis, the Welsh Education Minister, in support of his plans to reform RE and rename the subject "religion, philosophy and ethics".

The move follows a fundamental review of curriculum and assessment arrangements in Wales by Professor Graham Donaldson, a former chief inspector of schools, who urged pupils to be "ethical, informed citizens of the world".

The Welsh Government said a new curriculum could help "develop respect and understanding for other cultures".

Huw Lewis told the Senedd that there would be "an explicit commitment to allowing children to ponder ideas around ethics and citizenship and what it means to be a citizen of a free country".

Keith Porteous Wood, the executive director of the National Secular Society, and campaigns manager Stephen Evans met with Mr Lewis in January 2015 to discuss concerns about the existing relationship between religion and education.

Writing to the Minister for Education and Skills on the proposals, Mr Porteous Wood said the reforms were "very much in tune" with the NSS' thinking and said he expected the proposed reforms would be broadly supported by pupils and the wider RE community and other educationalists.

However, in its reporting of the proposals, the Daily Express effectively reproduced a story from the Breitbart news site alleging – without any foundation – that the proposals would somehow 'ban' Christianity. Some religious groups have also criticised the proposal with Rheinallt Thomas, former head of the national religious education centre, claiming there will be 'a campaign against it'.

Stephen Evans, National Secular Society campaigns manager, said: "There is a clear need to reform RE and we're pleased to see the Welsh Government taking the lead on this.

"We would very much welcome a new programme of study to replace RE that includes objective education about religious beliefs, but not to the detriment of other important philosophical and ethical perspectives.

"All young people should be entitled to a broad and balanced education so we hope that faith schools will also be required to teach the new curriculum rather than being free to teach religion from their own exclusive viewpoint, as is currently the case in some instances. We await further details of the proposed changes with interest."

The BBC reported that a new curriculum will not be in place for "seven to eight years."