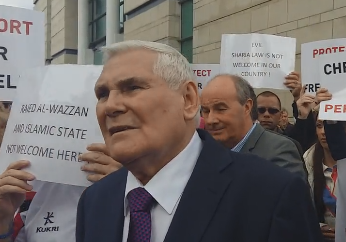 Pastor James McConnell has said he will carry on preaching his message about Islam, after his first day in court over an allegedly 'offensive' sermon.

Speaking outside the Laganside courts in Belfast, the preacher told a large crowd that he would carry on delivering the same message and added that he would "not go back on what I preached."

Pastor McConnell told supporters "I am not guilty" and said that he wanted to be exonerated. He has been charged under the Communications Act 2003 with sending a "grossly offensive" message for a sermon in which he called Islam "satanic".

The National Secular Society wrote to the Public Prosecution Service before the trial began, criticising the decision to pursue the case, and warning that the prosecution seriously undermined free speech regardless of whether McConnell is found guilty.

The firebrand preacher said the prosecutors in the court for the first day of the trial were "very nervous".

The case has drawn strong criticism from Christian groups and from an imam, Dr Muhammad Al-Hussaini, who said the prosecution was "quite contrary to our country's tradition of freedom of expression".

Pastor McConnell noted the widespread outrage over the decision, adding that the case was not just of concern to Christians. He said there had been a reaction of "anger" from atheists and "people who don't go to church" about the PPS' decision and said the prosecution was "ridiculous" and "stupid".

NSS president Terry Sanderson commented, "The National Secular Society regards this as a vital test case for freedom of speech. If Pastor McConnell is convicted, we will all be less free to express ourselves or to criticise religion.

"We have seen no evidence of incitement to violence in his sermon."

The preacher agreed when asked if the prosecution was an absolute waste of taxpayers' money and said repeatedly that there was "no way" his sermon was motivated by 'racism'.

It emerged before the trial began that the key prosecution witness is a man who praised the Islamic State's rule of Mosul. Dr Raied Al-Wazzan said that the Iraqi city was now "the most peaceful city in the world". Al-Wazzan is also the complainant who first prompted the PPS to take up the case.

In a letter the PPS has refuted the NSS' assertion that the prosecution was not in the public interest.

It is understood that Pastor McConnell will next appear in court on 3 September.