“This is how theocracies begin”, warn Guatemalan secularists on education bill 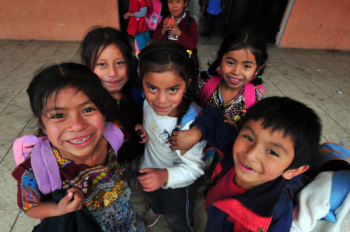 The Congress of Guatemala is considering legislation that would make lessons on "Biblical values" mandatory in all schools.

A member of the Guatemalan Association of Secular Humanists (AGHS) spoke out against the proposal in Congress and was booed at as he talked about the "the importance of separation between state and religion" and the "liberal tradition" of secularism that Guatemala has.

The legislation stipulates, the AGHS report, that all schools (private and public) must teach weekly classes on "Biblical values" and must "employ special teachers to teach them" and hire chaplains to serve as "spiritual guides" for pupils.

Regardless of their religion, or lack of religious belief, students would be "required to attend these classes and obtain a passing grade," the AGHS say. In their online appeal against the law, they write that this would violate students' rights to "religious freedom and freedom of conscience."

The group report that their representative was "insulted, bullied, threatened, and forcefully ejected" from Congress for "trying to explain the reasons why [the] bill is unconstitutional".

The AGHS has now started a fundraising drive to oppose the law, warning that the bill is "how theocracies begin."

The law would result in Guatemalan taxpayers "paying for religious [instruction] that should be paid for by individual churches and interested parents," they argue.

"All education in Guatemala will have a religious element, based on a 'literal' … interpretation of a particular Protestant version of the Christian Bible," if the legislation is passed, the group has warned.

The AGHS write that secular states are about "protecting the religious freedom of all individuals by not privileging any one religion over another" and that they are "highly motivated to fight for these rights", but need financial help to cover legal fees and generate media exposure.

Addressing what they call the "complex structural and cyclical problems" in Guatemalan society, the secularist group call for inclusive public services and evidence which is not based "on the personal religious convictions of public officials or private citizens but [on] scientific evidence."

The legislation is being promoted by a congressman who reportedly claimed he received "explicit instructions from God" and a "revelation" in the run-up to the proposal of the bill.