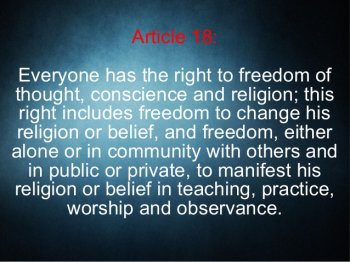 Honorary associates of the NSS have spoken out over the persecution of secularists, non-believers and religious minorities in a House of Lords debate.

Lord Harrison, a Labour peer and honorary associate of the National Secular Society, called on the Government to "ensure that the hopes and aspirations of non-believers" in Britain are "not suppressed by careless oversight when we take our rightful place in the public square".

"Why are we conducting this debate in the House of Lords, which still reserves a privileged place for the state religion?" Lord Harrison asked.

"Many will be heartened by the most reverend Primate the Archbishop of Canterbury's recent observation that religious freedom demands space to be challenged and defended, without responding destructively. This echoed Rowan Williams's reservation in 2013 that sometimes UK and US Christians exaggerate mild discomfort over social issues such as pro-gay legislation while failing to emphasise systematic brutality and often murderous hostility practised by religious fanatics abroad."

Lord Harrison pointed out that "humanists and atheists in Britain are still thoughtlessly excluded from contributing to Radio 4's 'Thought for the Day'", an issue the National Secular Society has long campaigned on.

In a wide-ranging debate, much was said about the Islamic State and the precarious position of religious minorities, non-believers and secularists in Islamic countries.

NSS honorary associate Lord Avebury warned that "Daesh makes no secret of its intention to expand its so-called caliphate from its base in Syria and Iraq so that it covers the rest of the Middle East and north Africa. Ultimately it aims to spread its interpretation of seventh-century Islamic governance and beliefs across the whole world, eliminating all other faiths".

"Eliminating the Daesh, its metastases and its wicked ideology taught in Saudi-funded madrassahs throughout the world must be the main goal of all who believe in freedom of religion."

However, Lord Alderdice blamed "secular authoritarianism" for religious fundamentalism, which he said was a "reaction". As an 'example', he cited Turkey, "where it was easy to support a secular regime and then be astonished at the reaction," he argued.

Turning to religious violence and terrorism, Lord Alderdice claimed that "many of those who support violence, including people in Daesh, do not come to it from a religious perspective at all."

A spokesperson for the National Secular Society said that "freedom of religion must incorporate freedom from religion. Wherever that is not understood, freedom of belief is threatened."

"While Islamic State draws headlines, it shouldn't be forgotten that freedom of religion and belief, and the right to apostatise, change your religion or renounce faith all together is virtually non-existent in many Islamic countries. The signatories of the Cairo Declaration continue to deny these basic rights to their citizens."

Lord Bach, the Shadow Attorney General, appeared to call for the Minister of Faith role to return- after the post was left unfilled after the General Election. The National Secular Society was highly critical of the post when it was first created.

The debate, which took place on Thursday 16 July, was called by Lord Alton of Liverpool on Article 18 of the Universal Declaration of Human Rights, which provides for freedom of religion and belief.

Lord Alton opened the discussion by arguing that "the four great murderers of the 20th century—Mao, Stalin, Hitler and Pol Pot—were united by their hatred of religious faith."

Baroness Anelay, a Minister of State in the Foreign Office, responded that "freedom of religion or belief and the right to hold no belief is a key human right" which is "under attack in almost every corner of the globe."

She added that the Government "oppose blasphemy laws wherever they still exist" and described "freedom of religion or belief" as "the key human right."