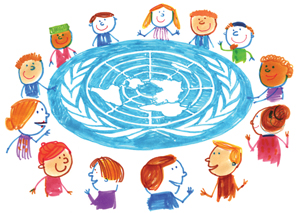 The National Secular Society has warned that faith schools are becoming increasingly divisive and inimical to the realisation of children's rights in a submission to the UN Committee on the Rights of the Child.

The warning came in a briefing to the pre-sessional working group ahead of the Committee's examination of the UK's progress in implementing the UN Convention on the Rights of the Child.

In its submission the NSS made recommendations relating to concerns about the way in which faith-based education is impeding the realisation of young people's rights under the Convention.

The UN Committee has previously raised concerns about the extent of segregation in Northern Ireland schools and in its submission the NSS says insufficient progress has been made in addressing this, pointing out that just 7% of children in Northern Ireland currently attend integrated schools.

The NSS also warned that the organisation of education around religious identities in other parts of the UK, fuelled by the Government's free school initiative, is leading to greater religious and ethnic segregation. The submission says the opportunity for schools to play a vital role in building social cohesion is being missed.

In a series of proposals on education the NSS urge the Committee to recommend that:

The NSS also raised concerns about the prevalence of children being taken out of mainstream education to attend unregistered religious schools without proper regulation or oversight.

The submission said a greater emphasis needs to be placed on ensuring that all children receive an education which allows them to develop to their fullest potential; develops respect for human rights and fundamental freedoms; and prepares the child for responsible life in a free society.

To that end the NSS urged the Committee to recommend that the UK Government does everything within its power to ensure that all children and young people attend registered schools which are subject to regulation and monitoring.

The NSS' warnings come as the Children's Rights Alliance for England (CRAE) released an alternative report to a Government submission, welcomed by 76 NGOs, warning that the Government had failed to "fully address" recommendations made by the UN in 2008.

The CRAE report points to emerging evidence of the free school programme leading to "narrow or religiously-based curricula being taught in some places, religious proselytization, unequal treatment and gender segregation" in violation of children's rights to a broad and tolerant education under Article 29 of the CRC.

It notes that "16% of places at state schools are allocated on the basis of religion, despite evidence that religious selection criteria may lead to discriminatory selection of pupils and curtail children's ability to make their own choices over religious beliefs."

In addition to expressing concerns about education and social segregation exacerbated by faith schools, the National Secular Society raised issues around child abuse by clerics and a "consistent pattern" of abuse being covered up by religious institutions.

The NSS called on the Committee to demand that all diplomatic avenues are exploited and pressure is applied to "secure co-operation and the recovery of necessary evidence" held by the Catholic Church.

Because of this, and other large-scale abuse, the NSS has recommended that the Committee call for the UK to introduce mandatory reporting of child abuse, including within religious organisations, and urged that within the "maximum ability of the law" the duty should apply to historic abuse, with severe penalties for non-compliance.