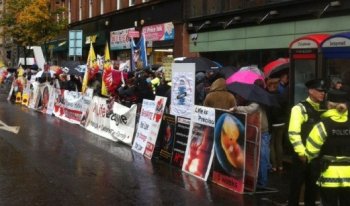 The National Secular Society has joined others in expressing concern after an abortion clinic was apparently forced to close after "intimidating protests."

In an open letter to Jeremy Hunt, campaigners, including a number of MPs, have called on the Secretary of State for Health to outline the steps being taken by the Government to support those providing and accessing abortion services.

On 21 July the Times reported that "intimidating protests" were to blame for seeing the clinic close, which is thought to be a first in Britain.

The letter to the Health Secretary states:

"It is not acceptable for any part of our National Health Service to be held hostage by a small number of protesters who are preventing women accessing, or getting information about, services.

"We believe that the NHS should be able to ensure that staff can work free from harassment, that patients can access services, and that no appointments are cancelled, or clinics closed, as a result of such disruptive actions."

The letter notes that within the 1967 Abortion Act it is "surely the Government's responsibility" to "ensure that there is provision for access to safe, legal abortions for women regardless of where they live."

NSS president Terry Sanderson commented: "These disgraceful tactics have been imported from America where the anti-abortion movement has become fanatical and lethal.

"If these people feel this strongly about abortion, they should make their case through the lobbying channels that we all have to use.

"The Government must ensure that staff can work free from harassment, and that patients can access services without intimidation" he added.

The closure of the centre has prompted renewed calls for "buffer zones" around abortion clinics so that protesters are excluded from the immediate vicinity of the centres.

The British Pregnancy Advisory Service has said "desperate attempts" are being made to prevent access to services.