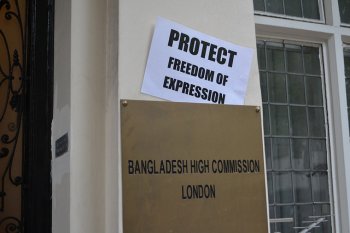 Several Members of Parliament have praised secularism in a debate on Bangladesh, and the NSS is calling on them to support secular principles in the UK as well.

Anne Main, a Conservative MP, espoused the virtues of secularism in a debate about the future of Bangladesh, despite voting "very strongly against" equal rights for gay people and "moderately against" equality and human rights legislation in the UK. The MP asked what the UK could do to "help the people of Bangladesh on their path to fulfilling their potential and delivering a future that upholds the ideals of peaceful secularism, prosperity and political engagement?"

She described a "vital struggle for secularism" and said, "we need Bangladesh to hold the line in an uncertain world and stand up for secularism and freedom of speech."

Main said that Bangladeshi Prime Minister Sheikh Hasina was "warmly welcomed" at a recent event for "reaffirming her Government's commitment to upholding secularism". Main added that critics of international aid would be 'satisfied' if they knew the money was going to "support a country that is independent, secular and a bulwark against the fundamentalist Islamism."

Several Labour MPs too were strongly supportive of secularism in Bangladesh. Jim Fitzpatrick, an honorary associate of the NSS, referred to Bangladesh's "proud secular history" while Chris Matheson said he was 'strongly supportive' of efforts to "introduce a civil society based on secularism".

Kerry McCarthy MP, another NSS honorary associate, spoke out on "grave concerns" about freedom of religion and speech. "The Government must protect the rights of religious minorities and atheists in Bangladesh, as well as the majority Muslim population," she said.

She also raised issues around abuse within arranged marriages as well as child marriage.

Hugo Swire, Minister of State at the Foreign and Commonwealth Office, said "I associate myself closely with the comments of my right hon. Friend [Mark Field] about the importance of a secular society."

The Minister added: "The recent horrifying and brutal murders of three bloggers in Bangladesh caused consternation around the world. The perpetrators must be brought to justice and the Bangladeshi Government must be unequivocal in protecting those who speak up."

An NSS spokesperson commented: "We are very pleased to see the Government seriously considering the violence targeted at non-believers around the world. We are also pleasantly surprised to see such a strong and explicit endorsement of the benefits of secularist principles from a Government Minister.

"As the struggle against Islamism which the Minister referred to is a global challenge, as the Prime Minister called it, we hope to see the secularist principles that Anne Main MP described as a 'bulwark' against religious extremism, and which the Minister endorsed, applied in the UK as well.

"While there are debates about what model of secularism is best, and how assertive it should be, it is gratifying to see secularist principles being defended so widely and with cross-party support."